It seems remarkable that only fifty years after the first moon landing do we finally have footage of the event that feels worthy of its tremendous legacy. Many feature adaptations (most recently Damien Chazelle’s sublime First Man, to which this will make a fine companion alongside Al Reinert’s melancholic For All Mankind) have tried their damndest to portray the awe and wonder of mankind’s greatest journey, but surely nothing has ever come close to this, Todd Douglas Miller’s exemplary documentary.

Utilising a veritable lunar goldmine of newly-discovered 70mm film from launch day – as well as restored on-board footage from the lunar lander – Miller chooses not to fill Apollo 11 with the usual talking heads, reconstructions or “Where are they now?”s. Only the voices of our historic trio – Armstrong, Aldrin and Collins – and their guardians at mission control remain. This narrow focus somehow adds to and enhances the inherent tension of a ludicrously dangerous mission, regardless of the fact we all know the outcome – the mark of any great true story retold.

Having seen so many (perfectly worthy) adaptations and watch the same old broadcast sizzles wheeled out for countless TV docs, experiencing that first ignition blast engulf the Saturn V rocket in crystal clarity and surround sound is – and I only use such an overworked phrase because all else fails me – a sight to behold. As Matt Morton’s exceptional score (conjuring musical magic using only instruments one could purchase in July 1969) swelled and every face on planet Earth looked to the skies as one, I could have wept. Oh, to be in that next generation of schoolchildren whose first sight of our giant leap will be something of such magical realism.

The quality of the film (format and feature both) is certainly astonishing, but more incredible still is the total discipline required to strip 65 reels (11,000 hours!) worth of history down to the pure essentials. Yet amongst the sweeping space vistas are delightfully small, human-sized highlights. See the Apollo crew mess around with a tape player in zero-g, or the hordes of onlookers getting a nice tan in the baking Orlando summer. 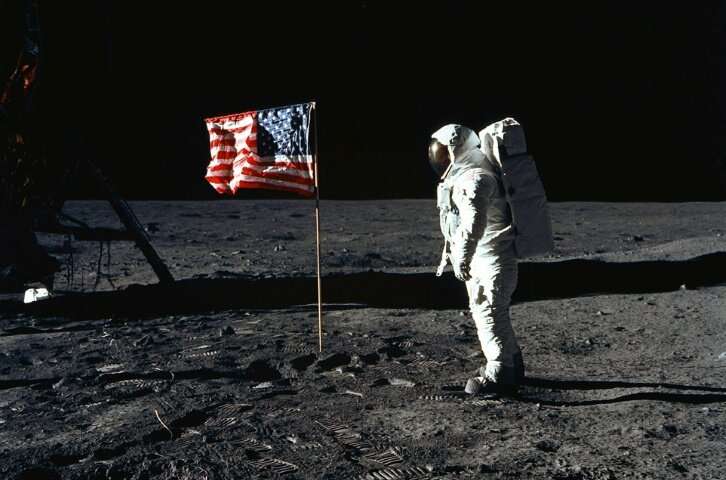 There’s also a timely glimpse of aerospace engineer JoAnn Morgan – the lone female voice in the NASA control room, centered in the frame and flanked by an endless sea of male peers (Miller spoke in a post-screening Q&A of a cut scene involving the 25 year-old taking to the official audio channel, correcting two colleagues bickering over each other’s calculations).

This spirit of giving everyone their moment in the moonlight, shining a light on these oft-forgotten faces is the heart of Apollo 11. More than its blockbuster-level exhibition and sheer space geek attention to detail, the true ‘experience’ lies in the chorus of commands, acknowledgements, “Good luck”s and “God speed”s, in seeing the faces of the crew – expectant, terrified, resolute – as mankind sits on the brink of a new age. We all know the eagle landed – seeing and knowing those who made it soar is something else altogether.