Spider-Man: Homecoming was a surprising movie. At the time of release, we were already exhausted by Spider-Folk crawling around our cinema screens. Not only had the doe-eyed nerd turned muscular Peter Parker already been rebooted, we’d frankly seen enough of the web-slinging action. As with Thomas and Martha Wayne, there are only so many times we can see Uncle Ben die on the big screen.

Regardless, Marvel were desperate to shove Spider-Man into the Avengers series and Brit boy Tom Holland took the red and blue spandex mantle with enough bravado that Homecoming worked. This is especially helped by Michael Keaton’s villain whose twist is so brilliant there was applause in the screens.

Anyway, having the first cinematic outing since the whole dust incident in Avengers: Infinity War and having lost Tony Stark in Avengers: Endgame, Spider-Man: Far From Home had to thread the aftermath together which it does successfully enough.

Following on from Thanos’ defeat in Endgame, and suffering from the loss of those who had fallen, the world tries to move on from the devestating event. Peter Parker, despite still being the friendly neighbour Spider-Man, is struggle with the grief of losing Tony as well as the pressure to follow in his footsteps. A much needed break is on the cards and, thankfully, his school is taking him on a Scholastic trip to Europe. However, whilst there, he and his class mates are attacked by the Elementals. Enter a new caped hero called Mysterio. Could this alternate dimension being be the person to follow in Tony Stark’s footsteps?

Far From Home is once again directed by Jon Watts and is stuff filled with action. At over two hours long, there is a lot here including shape-shifting aliens, drones, other dimensions, monsters from other worlds, megalomaniacs, and high-school romances. Far From Home is funny when it is looking at ordinary teenager life and gripping when there is world threatening danger involved. Whilst the balance isn’t always right, a particular bus ride feels unneeded, and the tenuous leap for the characters to get to London feels stretched, Far From Home succeeds in exhilarating action sequences and people who actual care about. There is also the matter of piecing together post-dust life and whilst the science is sketchy, it works well here. 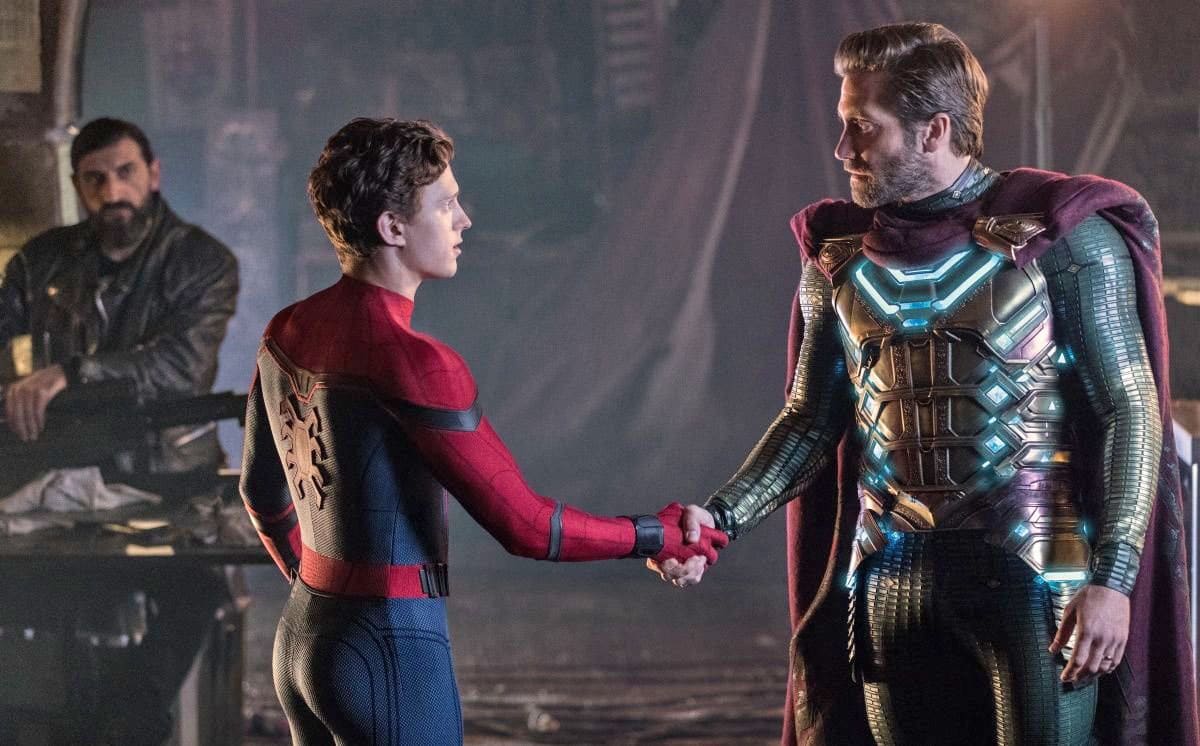 Holland is a brilliant performer. The young star can carry the weight of Parker’s troubles on his shoulders competently and viscerally. Through tears threatening to fall at all possibly moments to his earnestness to be an ordinary teenagers, Holland strongly portrays Peter’s struggles. It feels realistic that he’d handover a mantle and be manipulated and also push the world to collapse because he just wants to be an adolescent despite his superpowers.

Mysterio is played by the infallible Jack Gyllenhaal. With his trademark wide-eyes, Gyllenhaal can be truly menacing but also handle the absurdness of his character (especially how he is retconned into Avengers lore.) Not only this but adding the special effects and Mysterio’s “powers,” and the character is quite terrifying with a sequence that nearly kills Parker and bewilders audiences.

The MVP of the movie is Zendaya’s Mary Jane. The actress has a quick-witted delivery and a good amount of weirdness to feel like a wholly unique person. She also has oodles of chemistry with Holland so their natural relationship progression feels real.

Far From Home is a great footnote to the Avengers Infinity War Saga, finally closing a chapter and starting the next steps for a brand new generation of superheroes. Whilst Far From Home feels clunky with all of its parts, it is a satisfying entry in Holland’s Parker’s story. And with a mid-credit sequence that shockingly blows open that “how can he get out of this one?” door, we’re happy to continue with this friendly neighbour Spider-Man.

Spider-Man: Far From Home is out on DVD & Bu-Ray now!