True History of the Kelly Gang is a remarkable and brutal film which sees a unique perspective on famous outlaw Ned Kelly. Tackling this new vision, based on a book by Peter Carey, is Australian director Justin Kurzel, famed for his debut Snowtown and his magnificent version of Macbeth.

Movies on Weekends got to sit down with Kurzel to find out more about the making of Kelly Gang.

Congratulations on such a brilliant film, what drew you to the project.

I was first approached to do the film about Snowtown but I turned it down because I was too scared of it. You know, an Australian directing a film about Ned Kelly? That’s a highway to a hiding. It’s tricky. So I made two other films. I was really missing home so I picked it up again, read it, and kind of went “I have to make it.”  There was something about this that I suddenly understood.

It is an amazing provocative piece and who we are as Australians. I just saw a different perspective in it. I got my head around the fact it was fictitious piece about this extraordinary guy.

It must be tricky to then balance the book, the legend, and the actual man behind them both.

It is also about demoting the legend and challenge why Australian’s look at him in a different way in the. In the film, it is about history being rewritten. Ned has definitely become a bit of a carnival: We had him in the opening ceremony of the Olympics, his face is on a pie. He’s become something much bigger.

It’s almost like how we treat Jack the Ripper here.

And how Americans uphold Jesse James.

Ned Kelly did a lot of harm. You don’t excuse him in the film but you do give him a lot of empathy.

It’s look at why we treat these people as we do. It’s about needling away at the legend.

There’s a great thread here about how British colonization did damage to Irish immigrants and Australian natives.

Those pioneering days in Australia were pretty grey. Terrible shit was happening, especially to the indigenous people. Suddenly we now have this moral point of view about what they did to her back then.

I guess we are also interested in fate and destiny and what that meant having this Kelly name. Is he able to out run his destiny or is he giving in to the thing that everyone is somewhat dreading? That was a huge way into the legend. 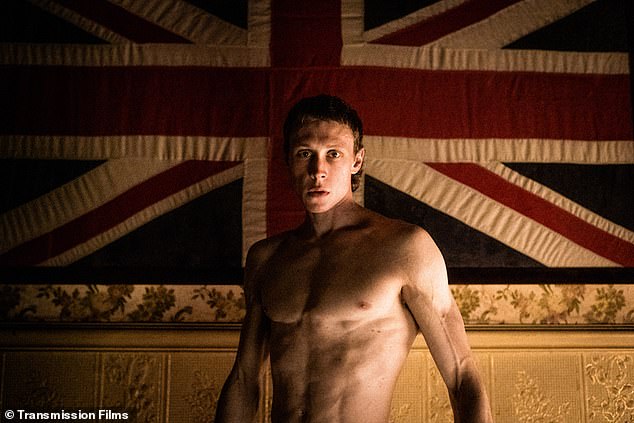 George MacKay is phenomenal here. What drew you to cast him as Ned Kelly?

He is just so nice and good and likeable. You just want to break him down. I wanted this feeling that that he could be anything or anyone. It was a journey and a transformation. There was virtue in him. It comes through physically with him. He did an amazing audition. He is so focused to be an amazing actor so I was very lucky to work with someone like him. He put his body through a lot. I wanted that experience as a director and it was really inspiring to me.

There’s stuff he does that I didn’t even think he had in him.

I haven’t seen George do this. There is a masculinity to him. That is the real power of him and one of the aspects that I enjoy.

The relationship between Ned and his mother Ellen is so overbearing in the film and the one relationship that rings true across the film. How did this develop with Essie Davies and George?

They spent a lot of time together. I think it was just to understand what her fear was: It was Ned outgrowing her and becoming bigger than the Kelly name. It was quite brutal behaviour in terms of the hold over him. For Ned, it was kind of the guilt of running away from the legend. When she is incarcerated, he decides to give up following a different path and decides “I am going to become this person everyone thinks I am and kills as many people as possible to free my mother.”

They had some pretty specific motivations.

And every male character he has to lean on just lets him down.

The men are really weak in the film. I always saw that the champion here is Ellen. In real life, she was in her early 90s when she died. She outlasted her children. There’s something really powerful about the presence of her. All the men, even the antagonists such as Charlie Hunnam or Nicolas Hoult’s characters are dismantling in front of your eyes due to the landscape. The place is completely destroying them. Ellen stands firm and strong. She understands what it means to be a Kelly.

The cinematography is incredible; how did you develop this with Ari Wegner?

I knew her from film school. I always knew she was right from the beginning. She has an extraordinary eye. I saw what she did with Lady Macbeth and met with her. She’s now working on the latest film by Jane Campion. She’s got a great film career ahead.

Throughout your films, you have a great appreciation for fabrics and clothing, such as the gauze and cotton in Macbeth. Here is no different:

We focused on the silhouette of them, rather than the details of the period. I loved bands from the 70s that looked like gangs. I wanted a similar look to that. That was a big inspiration. There’s something about the clothes: I wanted them to feel like you couldn’t quiet pinpoint where they were from. They could be modern and they could be period. 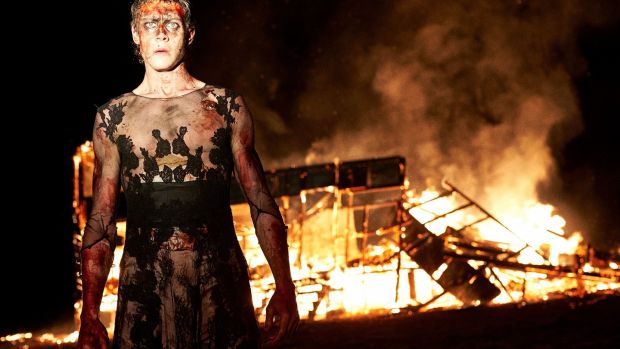 Then there’s a dress. While the story may be fictitious, they have related dress-wearing to Irish gangs.

There was definitely some record of gangs using this tactic to threaten the British. What’s more terrifying: A criminal or a man screaming at you in a dress. Steve Hart, a famous bushranger, wore a dress which we found inspiration in. Peter plays with it in the book. We just took it and ran with it, looking to deconstruct the Australian white male and the alpha at it and what type of man that it is. That was really fascinating, putting that sort of character in a black lace dress.

It’s funny because that’s the scariest version of Ned Kelly.

The boys just got used to the dresses so much and how amazingly comfortable they got. Not in a kind of flamboyant way. They were just really comfortable and that was exciting, seeing the dresses become an extension of their personality.

The music is also incredible here, how did you develop this with your brother Jed?

It is so good every time we do it. I can say things to him that I couldn’t with a different composer. There’s a wonderful shorthand there. I am very lucky. We have similar tastes and his music has become such a huge part of the films I have made. He has been very constant.

Is there a fear that this Australian legend would not translate to UK audiences?

There is an audaciousness to it that makes it sort of stand out in regards to stoy-telling. The idea of narratives being changes to make up a story is prominent in our culture. We find it difficult to trust information and trust the persona of someone. I think that is challenging. Hopefully there is something universal here.

There is also a definite rise in our love for anti-heroes and dark characters such as the infamous Joker.

We really are looking towards the characters who fall through the cracks. Suddenly we are in a place of high achievement but are petrified of saying something wrong. It is a tense time. I think we are interested in those types of characters because it feels pretty liberating.

You yourself have a history of dark characters in your work. What draws you to them?

I don’t know. I’m really worried about my mind.

I’m really interested in what draws characters towards violence. It is really interesting because could Joker have been made two years ago? Why did people really embrace it and see it? It’s really curious.

I’ve made films that are quite violent and I don’t know whether we can make Snowtown today. How would people have responded to the violence? It’s fascinating to see how people’s relationships are forever changing.

True History of the Kelly Gang is out on Digital now.
DVD & Blu-Ray on 29th June