Jumanji: Welcome to the Jungle was definitely a surprise hit. The film proved that you can take something we’re all nostalgic about and update it for a new audience. Turning the infamous board-game into a console, the funny and fresh sequel blew the cobwebs from the cartridge of the original Jumanji and rebooted it well enough to garner yet another movie – The Next Level.

Bringing back cast members Karen Gillan, Dwayne Johnson, Kevin Hart, and Jack Black, can this latest venture into the world of Jumanji capture the magic of the first two films?

Directed by Jake Kasdan again, The Next Level kicks off months after the events of the first film. Our heroic quartet have all gone their separate ways. Hoping to unite at Christmas, Bethany, Fridge, and Martha are dismayed to learn that Spencer hasn’t been returning their calls or bother to show-up to their planned meeting. Turns out, Spencer is having a tough time at University. In order to escape his anxieties (as well as his disgruntled grandfather Eddie,) Spencer decides to fix the Jumanji game and enter the chaotic world once more so he can be the dashing Professor Bravestone. When the gang find out what he has done, they realise they have to into the game again so they can find him and bring him home. However, they bring a long two unwilling people – Eddie and his old friend Milo, both of whom fail to understand the concept of the game.

The Next Level is OK. The jokes are not as bountiful or sharp as the first film. The initial premise and the surprise success of Welcome to the Jungle melts away and the characters and comedy feel somewhat vapid. . Kevin Hart and Dwayne Johnson struggle to portray Danny DeVito and Danny Glover. The “old people who don’t understand what’s going on” premise grows thin really fast and how they choose to rectify this issue brings us to The Next Level’s biggest problem: it negates basic Jumanji law. 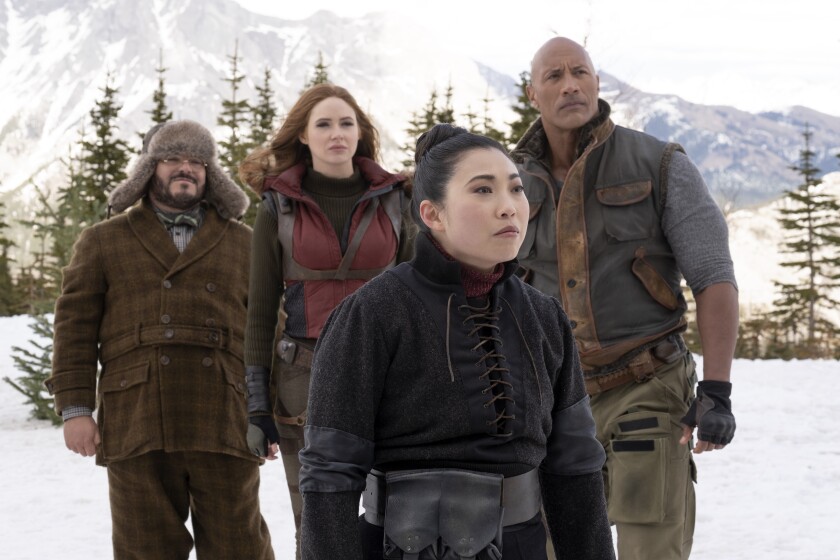 Think about the first film back in 1995: Peter tried to cheat and was thus turned into a monkey. In The Next Level, Spencer tries to rig the game in order to be Bravestone again but is, instead, given Awkwafina’s character Ming Fleetfoot. When the other characters meet Fleetfoot, Spencer announces that the character is exactly like him – a very Jumanji type punishment for trying to thwart the game. Instead of learning that he can complete the game basically as himself, without the ripping muscles of Bravestone, the script instead invents a plot device that means they can swap bodies, conveniently converting them all back to the original bodies of Welcome to the Jungle.

Jumanji is often cited as a ruthless game so why would it then introduce something as convenient as this? It is such a big crime that The Next Level not only forgets the laws of this brutal jungle but also decides that Spencer doesn’t really need to learn an important lesson here. They gift him Bravestone again which destroys any character development.

It is almost as though they knew that Dwayne Johnson could not carry off his Danny DeVito schtick for an entire movie (which is absolutely correct.)

Not to mention, the marketing for this film makes it seem like there is a glitch which causes all kinds of mayhem for the characters. This isn’t really the case. There is no apparent problem with the game apart from the fact it sucked in the elderly Milo and Eddie.

With smaller laughs than the first film, The Next Level is fine at best. There are impressive action sequences to keep you invested in the movie. Plus, Jack Black and Karen Gillan are great yet again and the pair really hold the movie together.

It’s just a shame that instead of levelling up, this latest Jumanji fare feels like the franchise is powering down.

Jumanji: The Next Level is out on Blu-Ray, DVD, and Digital now!