On the forefront of producing teen dramas is Netflix. They have truly carved themselves a niche out of telling a wide variety of stories from the popular To All The Boys I Have Loved Before… to perhaps not as well-received outings like Reality High. And almost 72% of them feature Noah Centineo in some fashion.

Well, here is a film that sets itself apart from the usual Netflix Teen Movie garb (and certainly doesn’t feature Centineo.)

Alice Wu’s The Half of It is a brilliant unassuming film that has a spirituous nature to it. It revolves around Ellie, a high school senior who is living in the remote and fictional town of Squahamish. A brilliant creative writer, she spends most of her spare time doing her father’s duties as the towns station master, following the death of her mother. Ellie is approached by sports jock Paul to write a letter for popular girl Aster. However, Ellie has a crush of her own on Aster and has to hide how she feels whilst similarly pouring those emotions into the letters and texts. As Paul and Ellie become closer as friends, they find themselves getting deeper into the mess…Can Ellie find her voice?

This is a light and sweet take on Cyrano de Bergerac. Written and directed by Wu, this is a soft and cute movie that will tickle your own emotions as Ellie emerges from her shell. Memorable moments heighten that adolescent feeling of yearning such as a float in a hot springs or midnight conversations over text, producing poetic lines such as “Worlds asleep, more room for thoughts.” In these nuggets of teenage wisdom, uttered by an absolutely incredible Leah Lewis, The Half of It really finds it stride. 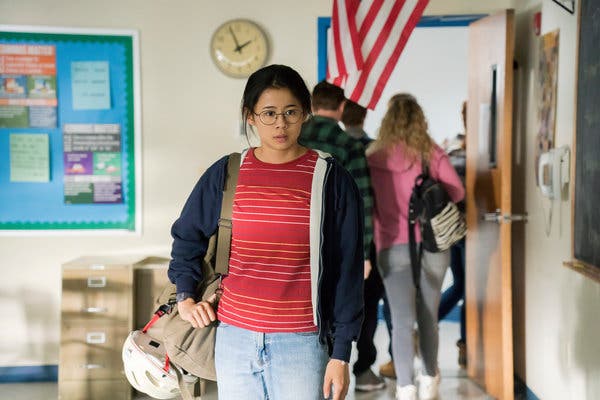 There is a clear story aching to get out and some may be disappointed that The Half of It doesn’t become an intimate lesbian romance. However, it feels that isn’t the point. In this world of messiness, there are no complete happy endings for teenagers, and Ellie is no different. Instead, The Half of It leans more into finding your own voice, who you are, and finding your tribe. This develops largely between Lewis’ Ellie and Daniel Diemer’s goofy but kind Paul. Together they mature into a brilliant friendship, dealing with grief, religion, and their blossoming feelings for Aster. It is multi-layered and phenomenal.

The rainy town of Squahamish is a perfect backdrop for this, with great cinematography by Greta Zozula. Whilst the story can be slow in places, Wu’s work is wonderful to watch.

The Half of It is available to watch on Netflix

One thought on “The Half of It – Review”