It’s almost time for the Justice League to reunite on our screens for Justice League Dark: Apokolips War. The new animation follows on from the brilliant Justice League Dark, so we thought we’d remind you of all the action that took place ahead of the DVD, Blu-Ray™, Blu-Ray™ Steelbook & BluRay™ Minifig release on May 18. The film is available on digital download now!

At the start of Justice League Dark we see the world descending into chaos, as numerous violent incidents are committed all around the world. People live in fear that their fellow humans are in fact horrifying demonic creatures. The Justice League is called into action to bring order and peace back to civilisation. Under the impression that these are magical threats from a supernatural entity, the league come to the conclusion they are not the best equipped to deal with it, forcing them to call in the help of some mystical heroes.

Batman is highly sceptical that the threat actually originates from a supernatural entity and on his return to Wayne Manor, suffers a temporary blackout. When he wakes up, he sees the message ‘Constantine’ smeared on the walls. During a flashback, we find out that John Constantine is an exorcist and con man, who engaged the Demons Three in a poker game for high-end stakes, along with Jason Blood. During the game, Constantine offers his home in exchange for a box of artifacts, including a Dreamstone. When both parties are caught cheating, Constantine summons Blood’s demon alter ego Etrigan to dispatch demons. It’s safe to say, Blood wasn’t too happy with Constantine for making him summon Etrigan, and the two part ways.

After his blackout, Batman sets out to visit Zatanna at one of her shows to ask about John

Constantine, whom she once shared a fractured romantic history with. Zatanna agrees to bring Batman to meet with Constantine, but the trio are faced with a rush of magic summoned by an unknown sorcerer. The trio narrowly manage to escape to the House of Mystery for shelter where they are joined by Black Orchid, the spiritual embodiment of the House. The group gathers to share information, and after a quick disagreement between John and Zatanna the group agree to team up to investigate the cause and reason for these supernatural circumstances. 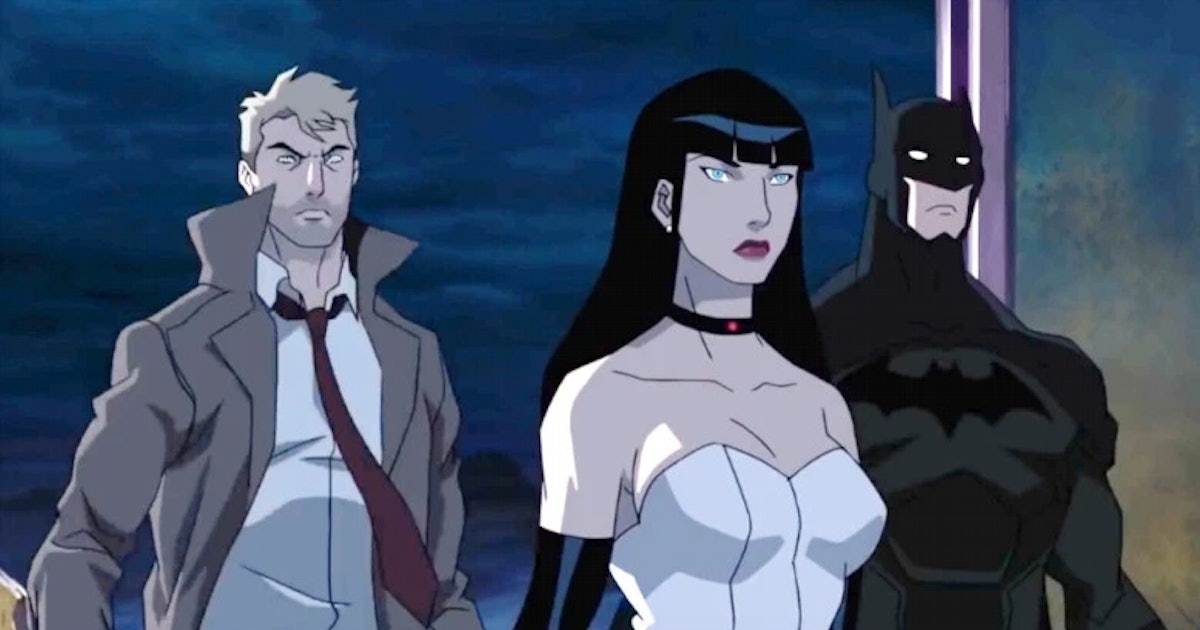 Embarking on their investigation, the Justice League first pay a visit to Ritchie Simpson, an old friend of Constantine who is suffering from cancer and awaiting his fate of death. Simpson reluctantly agrees to hand over the powerful Keshanti Key, which can be used to unlock and search through a victim’s memories. Constantine and Zatanna do so on one of the victims, leading them to discover the victim had been possessed by an unknown entity wearing a strange and unique ring. All of a sudden the supernatural creature manages to escape the body of the victim, but is quickly subdued by Zatanna.

On return to Ritchie’s home they find Ritchie close to death, as well as Blood who is on a mission to find the Dreamstone. In an attempt to save Ritchie’s life, Batman revives Ritchie with an adrenaline shot to the chest, leaving him in a coma. Blood then reflects on his past life and explains the significance of the Dreamstone, which was created during the era of King Arthur by a sinister, scheming magician named Destiny.

In order to defeat the power Destiny possessed though the stone, King Arthur ordered Blood to destroy Destiny who managed to cleave the stone into two, successfully banishing the sorcerer but leaving himself mortally injured. In anticipation that Destiny was only temporarily defeated and eventually would return, Merlin fused Blood with his demonic servant Etrigan so he could battle the evil magician, once the Dreamstone resurfaced.

When Ritchie awakens, he reveals he is the holder to the other piece of the Dreamstone, which he has been using it to keep his cancer in remission. Ritchie is then seemingly killed when the

Dreamstone resurrects the powerful historic sorcerer, Destiny. Destiny destroys Constantine’s House of Mystery and is on mission to create further chaos and destruction.  Zatanna comes to the rescue to save the group from the war path of Destiny but passes out from the attempt. We then see the Justice League enter an all-out battle with Destiny, which leaves Jason Blood separated from Etrigan once again. Constantine summons Swamp Thing/ Alec Holland, a humanoidplant elemental superhero to fight Destiny while Batman and the recovered Zatanna disable the Justice League. Swamp Thing surrenders as we witnessed Destiny ripping Alec Holland’s corpse from Swamp Thing, weakening him against Destiny’s strength.

Eventually, Constantine pulls Destiny into his protective shield leaving him powerless against a second attack from Blood. This gives Constantine, Batman, and Blood enough time to destroy the Dreamstone and Destiny’s body, which also results in Ritchie’s soul being dragged to Hell. After the battle, Blood succumbs to his mortal wounds from centuries before and is buried by Constantine, Batman and Zatanna near Blood’s old village. Etrigan now separated entirely from the body of Jason Blood sets off for the unknown.

Zatanna eventually agrees to join the Justice League, with Constantine also being offered a position of which he declines conscious that Batman wouldn’t approve. Zatanna is quick however to state it was Batman’s initial idea. The two return to the newly-rebuilt House of Mystery, taking the first step to rebuild their rocky relationship.