The journey of Snowpiercer, particularly for us in the United Kingdom, has been an interesting one. Due to demands by Harvey Weinstein, insisting that 20 minutes be cut and monologues be added at the start and end, Bong Joon-ho refused and the film itself languished in the station, struggling to find a worldwide distributor.

Lucky, in 2018, it was acquired by Amazon Prime Video, sadly avoiding cinema’s here in England. However, due to Bong Joon-ho’s incredible Parasite scooping up Best Picture at the Academy Awards this year, Snowpiercer is now everywhere. Including today’s very special Blu-Ray release.

Based on a graphic novel by Jacques Lob, Snowpiercer is set in not so distant future where climate engineering, in order to stop global warming, has unintentionally frozen the entire planet. Remaining survivors of the human race now live aboard a huge freight train that speeds across the entire globe. In the front (or the head,) live the affluent and wealthy whilst poor wretches are left to fend for themselves in the tail-end of the train.  Things go awry when Curtis, a member of the lower-class section, leads a revolution against the elite, intending to kill leader Wilford.

As Bong Joon-ho’s bombastic action film is a highly-stylised treat. Thrown into a catastrophic world filled with violence and bloodshed, Snowpiercer is a visually stunning movie. Straight away, you are catapulted into the unjust and unfair society of the titular train as Curtis and his band of rebels attempt to overthrow the system. Battle sequences ensue through the gritty tail end to the colourful and elegant wealth of the front. A particular moment is certainly a highlight – a blackout battle told through flame and night-vision. Gruesome and gruelling, it is reminiscent of Park Chan-wok’s hallway sequence in Oldboy.  Through shocking revelations, twists and turns, Snowpiercer keeps you guessing in terribly exciting ways. 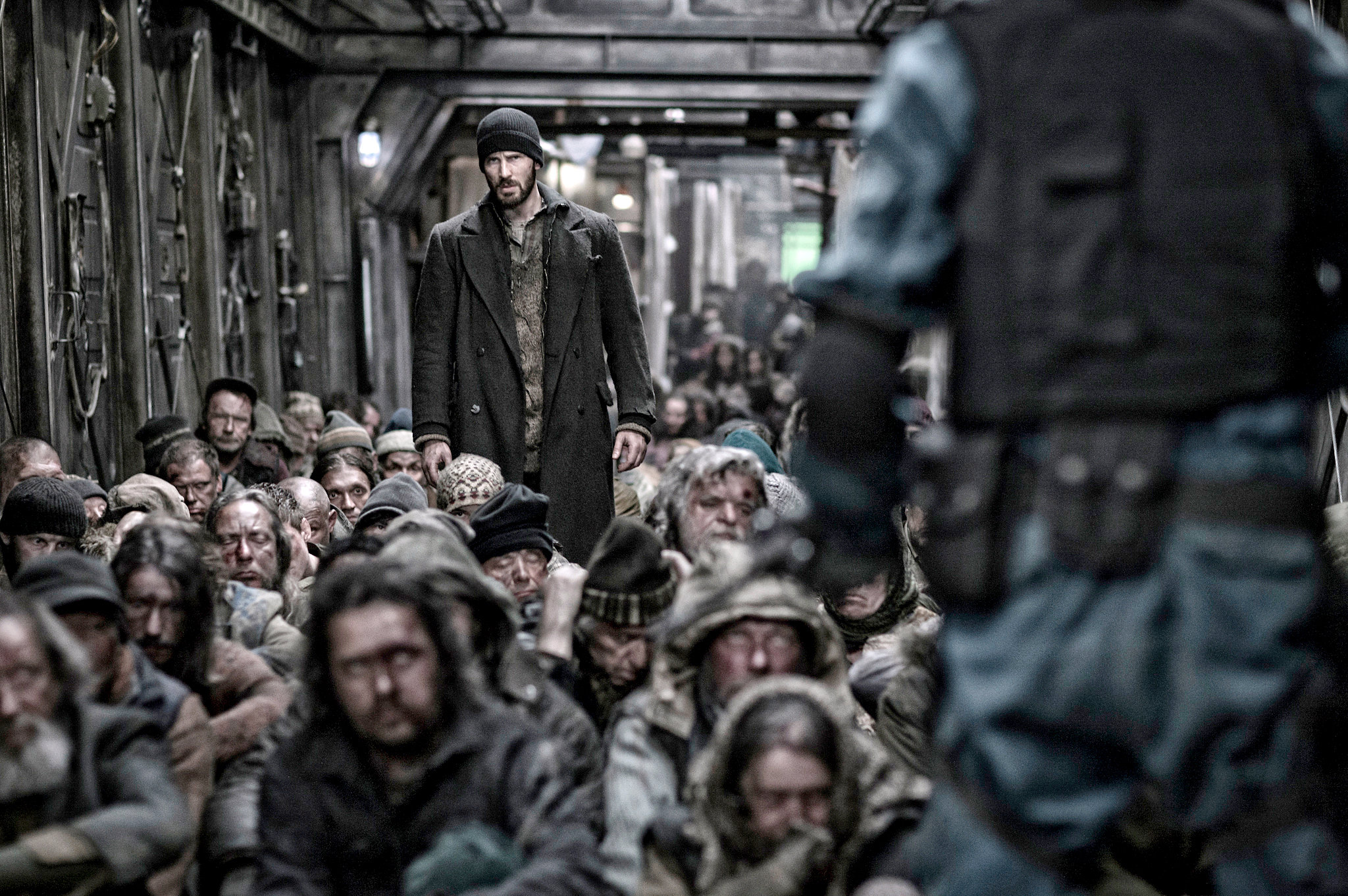 Chris Evans puts in his best performance as Curtis. Here’s a role that could’ve easily been sluiced down to rugged hero. Yet Evans layers Curtis with a quiet sensitivity as he tries to deal with the savagery of leading a rebellion. A haunting monologue at the end of the movie grips you, exploring Curtis’ abhorrent backstory. Evans can battle and fight but he also has a keen sense of motive and character which comes through Curtis’ own journey.  Supporting him are the lines of Song Kang-ho,  Octavia Spencer, Jamie Bell, Ed Harris, John Hurt, and an unrecognisable Tilda Swinton (who proves ever the chameleon as the smarmy, big-toothed opposition Minister Mason.)

Snowpiercer is a post-apocalyptic ride which feels like a brilliant blend of Mad Max: Fury Road and Blade Runner. Though the metaphor feels very heavy handed at times, sluicing the world’s class system down to train carriages, one may be as bold to say this is the point. Also, in this current climate, where government officials and the wealthy elite are lording over us, ready to throw us onto the tracks in order to survive, Snowpiercer feels achingly relevant.

Snowpiercer is out on Blu-Ray now!