Strawberries and cream. Gin and tonic. Peanut butter and jelly.

There are plenty of perfect duos, where taste and texture combine to create the perfect blend for our taste buds.

The dark comedy show created by Liz Feldman revolves around Jen Harding whose husband has died in a recent hit-and-run. After attending a group counselling session, Jen meets the amiable Judy who is also suffering from grief after her fiancé died of a heart attack. An unlikely kinship forms between the pair.  Soon Judy becomes embroiled in Jen’s life as the latter struggles to mourn properly. Instead, Jen finds herself obsessed with find out the truth – who really did kill her husband? 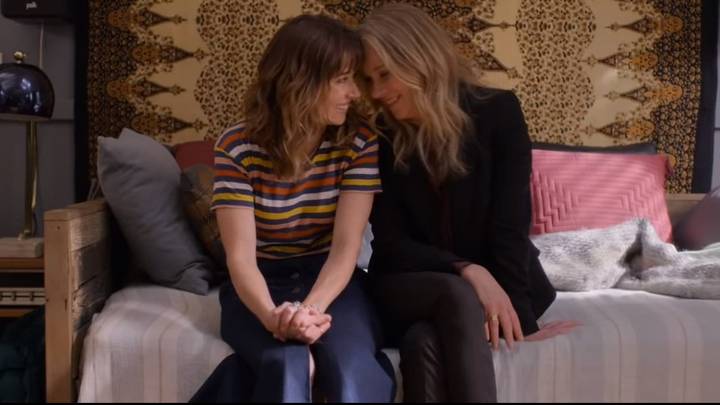 Set in the heated and wealthy streets of Laguna Beach, LA, Dead to Me is an opulent suburban crime mystery helped by its gallows humour. Striking images become the backdrop for this juicy plot as, like Jen, you try desperately to uncover the truth, finding that it is closer than she expects. Feldman and her team back a lot into twenty minute episodes but the twists are so delicious and sometimes so simply bonkers that you are gripped, blazing through a season in a day. Witty and with a fiendish centre, Dead to Me is a season you can’t help but dive into.

It helps that the two leads are so impeccable together. Applegate is perfection in everything she is in. As Jen, she has to be more sarcastic and angrier than Judy, which means she gets the insanely phenomenal one-liners that Applegate delivers flawlessly. Yet beyond this, Applegate and the spectacular writing gifts Jen an utterly wonderful emotional make-up. Her foil is Cardellini’s Judy. A softer and more emotional character, Judy serves as an unusual friend for Jen who is also rooted in her own complications. Hiding a whole life from Jen, full of secrets, Judy tries to make it along with her chipper attitude and hipster ways. The characters and actresses shouldn’t work but you know what they say about opposites – they attract. And with that they make one hell of a pairing.

The centric friendship is supported by James Marsden and Diana-Maria Riva who are phenomenal players that I wish I could talk about more, but I’d give away major plot points to the series. They are utterly watchable and wonderful with Marsden continuing to be a constant underrated treat in everything he’s in.

Season 2 may not feel as sharp as the first season, especially as the secrets are less juicy and some twists do just feel extremely improbable. However, thanks to the impeccable chemistry between Applegate and Gardellini, you can’t help but sip;

Dead to Me is available to watch on Netflix!