There has been a happy surge of queer coming of age movies. Telling teenager LGBT stories with a light-heartedness such as Love Simon or Alex Strangelove is an important experience. Added to that roster is the charming Dating Amber.

Directed by David Freyne, Dating Amber is a coming of age Irish comedy from David Freyne. Set in the 90s (our latest era to exhaust post our 80s obsession,) the film follows Eddie, a young boy who wishes to follow in the footsteps of his Army father. However, Eddie has been harbouring a secret – he’s gay. In Ireland, where homophobia is rampant, Eddie worries about coming out. Amber, his rebellious classmate, is in the same situation and proposes that they pretend they are dating to ward off anyone finding out that they are gay. But as passions arise and the truth begins to close in, can they keep playing along with the lie?

Dating Amber is a sweet movie that is dependent on the quaint chemistry between lead actors Fionn O’Shea and Lola Petticrew.) With Amber as a punky rebel who dreams of leaving Ireland to find solace in the open and vibrant London, Eddie starts to evolve into himself and think about a life beyond regiments and routines.

Together, they carve their own path but what Dating Amber does well is to separate their own coming out stories. The main drama comes when Amber decides that she no longer wants to play along whilst Eddie becomes more anguished, pushing himself further into the closet. This battle of wills is poignant and important to see that coming out is not necessarily a smooth road. Scenes in which Eddie embraces a drag queen during their first visit to a gay bar or Amber’s first sexual experience are moments within this movie that elevate it above its quaintness.

O’Shea and Pettigrew add nuance and weight to these characters and gift them moments of genuine growth plus seem like a really good friendship. 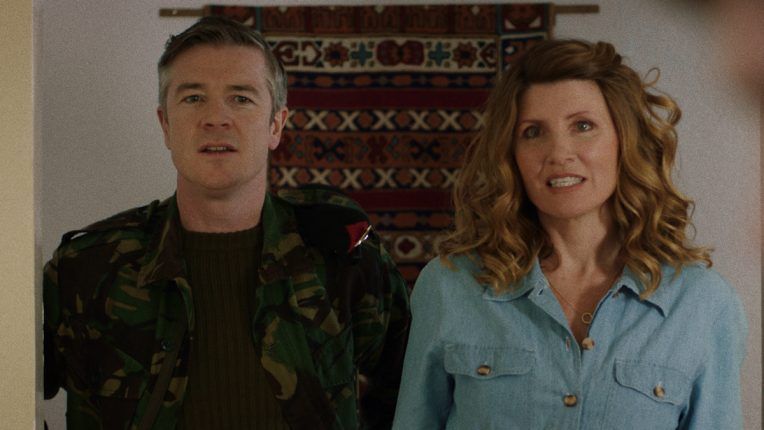 There’s another issue it tries to deal with as Eddie’s parents, Sharon Horgan and Barry Ward, struggle with their unhappy marriage which is illegal in Ireland.  Horgan also gets a wonderful speech towards the end of the film, showing that the mother talks to son monologue is becoming a staple of recent LGBT cinema. .

Dating Amber is nice enough. There’s a pleasant soundtrack which is different from the 90s norm.  It feels a bit flat and safe in places but it is an amicable teen watch