The unbearable grief that comes with losing a child. It is an unimaginable pain that is often portrayed in films such as The Disappearance of Eleanor Rigby, The Way Back, and more recently, in Disney’s Hamilton production.

The film revolves around Swedish family Tobias, Elin and their daughter Maja, who is celebrating her eighth birthday. After an allergic reaction to her mussel pizza at lunch sends mother Elin to the hospital, they are dismayed to wake up the next day to find Maja dead from the same thing. Three years later, the still grieving parents head on a camping trip. In a secluded part of the woods, they are pursued by three murderers: A white man in a bowler hat, a girl with high pigtails, and a gruff lumberjack, as well as a Cane Corso.  As Tobias and Elin try to escape, they find themselves caught in a time-loop, constantly trying to escape the villains.

Koko-di Koko-da is a wrought horror that uses relentless killers and bizarre imagery to explore two  parents reeling from the sudden death of their child. There are frights here. They come from Nyholm’s fantastic use of anticipation. Long stretches of road filmed at night ramp up the dread in many different cycles of the story. By the time you are back in the tent the third time, you wonder how our plucky pair are going to escape this time.

However, there is a real depth to this terrifying tale. Whether or not the cartoon-esque killers, straight from the daughter’s music box, are really pursuing the parents or they are actually caught in this sadistic purgatory, Nyholm uses the movie to examine the parents’ trauma. 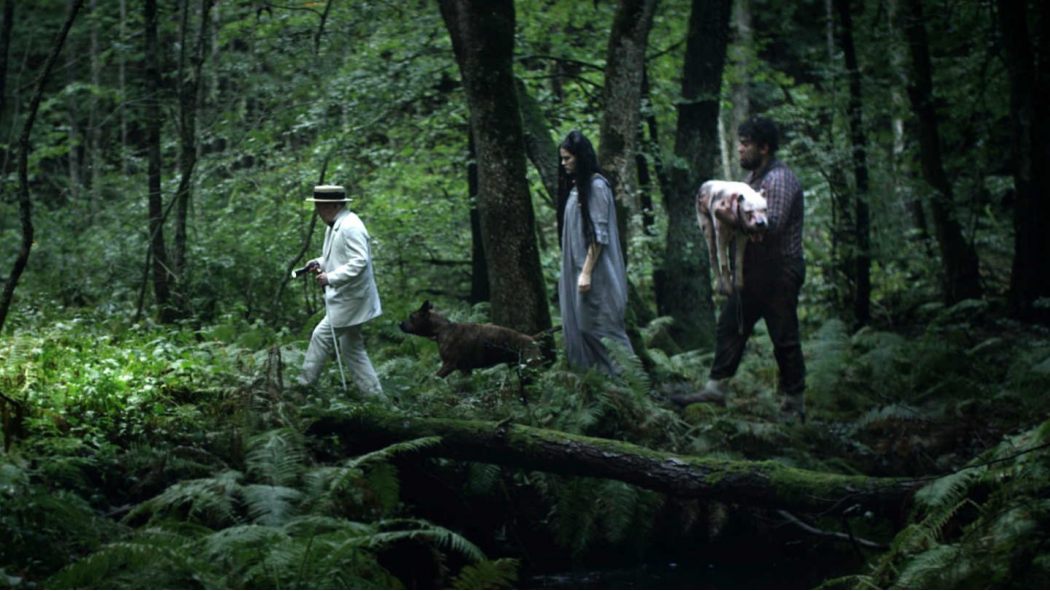 Imagery such as shadow puppet bunnies losing their own child (a throw-back to the families last day, in face paint as pink rabbits) shows Elin’s tender and deep loss. All the while Tobias constantly feeling perilous to save his wife and child, and this is examined as he struggles to fight against the fantastical villains. When you walk away from the film, and its ambiguous end, you’ll find your thoughts looking deeper into these visual metaphors.

Lei Edlung and Ylva Gallon are great as the bereaved parents but they are overwhelmed by the nightmarish story-telling. The on-going spectacle of the sadistic cycle keeps you more invested then that of the characters’ journey. Whilst sadness and grief are still there within the film, the characters are not explored enough. Therefore, they could just be any old parent dealing with this tragedy. Perhaps this is the point. It’s a shame because the lead actors are brilliant.

Koko-di Koko-da will leave a lasting impression on you long after viewing, even if it is just the song stuck in your head.