Zack Snyder’s work splits audiences down the middle. There are some who really don’t like his work, believing it to be style over substance. There are others who love his work. Enough to campaign online for his cut of Justice League. You know, those obsessive types who like his word-building and style.

And I am exactly in them middle with Sucker Punch.

When you think about it, Sucker Punch is the most egregious of Snyder’s work but somehow has enough elements strung together to keep you interested. One element in particular. But, hey, we’ll get onto it. Anyway, Sucker Punch revolves around this young girl named Babydoll who is blamed for the death of her little sister in a ruckus. Bribing an orderly named Blue Johns, her stepfather sees that Babydoll is lobotomised. However, she has an escape plan – she just has to retreat into her fantasy world to exact it …

You can never deny Snyder his visual presence and in Sucker Punch it is no different. Yes, he wanted it to work like a video game and in many ways, it works taking the view as close to the controller as possible. The slick visuals gift this film with a redolent atmosphere and are genuinely engaging to the extent that you want to continue watching for the frivolities.  Emily Browning, despite her lost looking looks being somewhat repetitive in movies, is genuinely good in her role of Babydoll with an always excellent Jenna Malone beside her too. Plus, Oscar Isaac plays the main villain Blue Johns and Isaac never fails in producing a genuine performance, especially when he is being over-the-top villainous.

Let’s face it though, Sucker Punch‘s greatest triumph is the soundtrack. Bjork? Skunk Anansie? Queen? Set it to some incredible action scenes and backdrops? Oh my god, yes. It is so very dreamy! 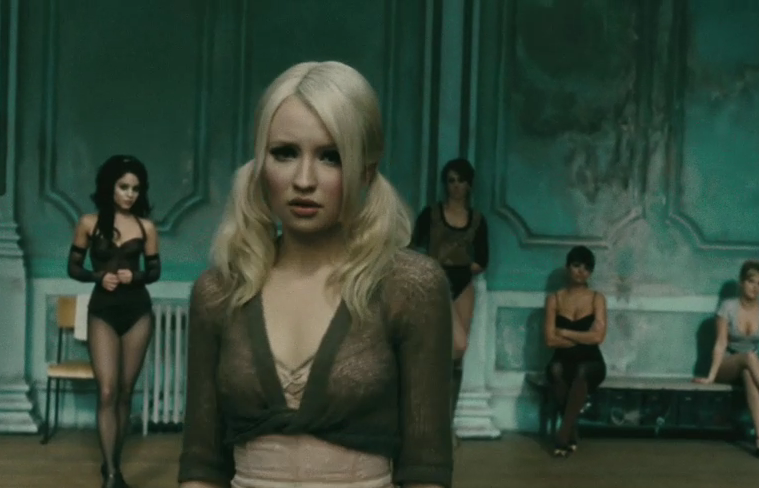 My biggest problem with Sucker Punch is the apparent “big reveal.” Because that is clear from the beginning that this is all going on in her head and the things are happening in the hospital she has been staying it parallel her fantasy world. Which is not as infuriating as the fantasy world itself. So pushing the limits as far as you can go with dream sequences and a whole lot of stuff going on in someone’s crazed head, it still makes little sense. I mean, having one imaginary landscape is fine but having several is a bit banal? It ruins the fun of the brothel escape transcending into these different fantastical tableaus ripped out of video games. I mean, these could’ve seamlessly blended into one and work a lot better than being guided down different rabbit holes and expected to care.

Also, having her go into this for dancing purposes? This makes no sense. Are her dance moves her fight moves? Or is it something she is retreating to as she does these sexed up moves that we can’t see because Browning was underage? It’s these distracting elements that make the film fall apart.

Sucker Punch is shallow and tries to grab at some depth but ultimately paddles away from the deep end. It’s not a terrible effort but it has a bunch of girls running around in shorts and lingerie with no great characterisation.  It’s terribly shallow and yet somehow, you’ll want to watch it. Whether that says more about Snyder or yourselves, you’ll have to decide.

Me? I am mainly in it for this moment at the credits.

And it is worth the wait!