The first film using Sir Arthur Conan Doyle’s character of Sherlock Holmes was in 1900. It was 30 seconds long and showed the great detective being confused by a disappearing burglar. In the last 120 years he has been all over the world and been seen in just about every medium imaginable. So how can you do something new with such a long-established character? Well, how about with someone new to shake things up a little, and that is exactly what we get in the Netflix produced Enola Holmes.

Enola (Millie Bobby Brown) is a brilliant and talented young woman, raised by her mother Eudoria (Helena Bonham Carter) to think for herself. One day her mother disappears, leaving Enola clues and setting her on a path of her own, one that will lead her into the path of the young wayward Lord Tewksbury (Louis Partridge) whilst trying to avoid her older brothers Sherlock (Henry Cavill) and Mycroft (Sam Claflin) to avoid a fate worse than death: finishing school. Enola will need all her skills to survive and uncover the mystery, one that might threaten the very future of England. 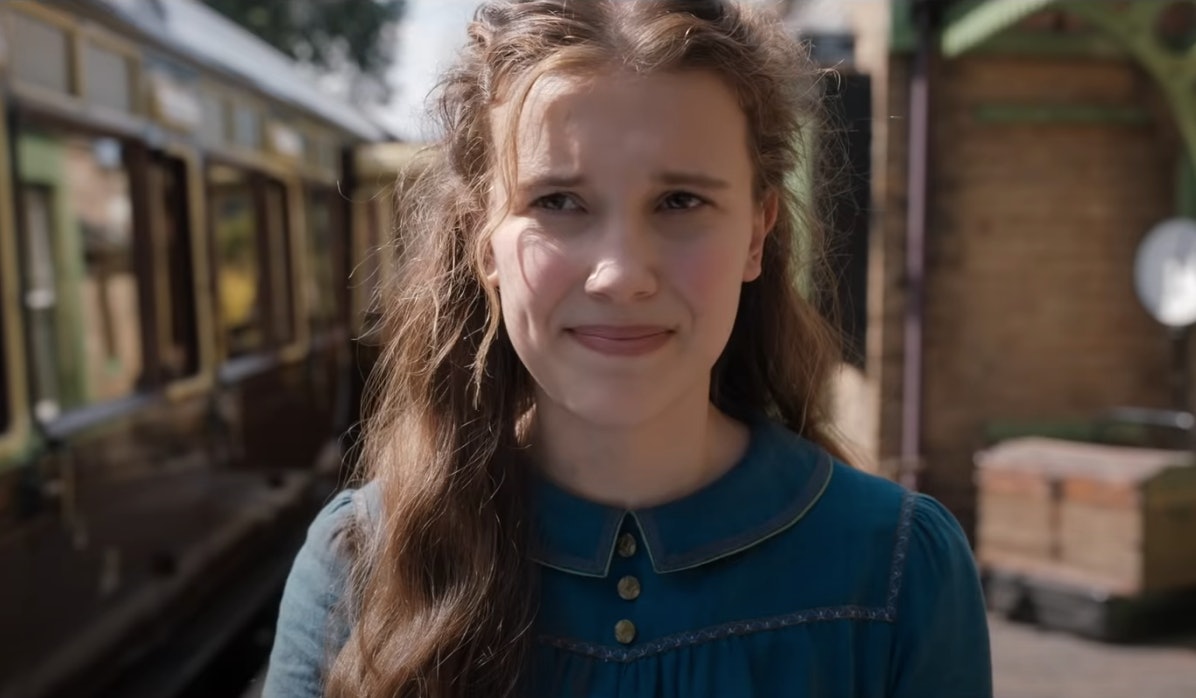 Enola Holmes is a delight to watch, one which is a little slow to get started but by the end you are fully immersed in the world it builds and invested in the characters that inhabit it. The action is solid with an extended fight scene at the docks being a particular highlight, complete with a glowering villainous Burn Gorman. The film also has a really interesting mystery at its centre, which might sound like a bit of an odd thing when talking about a detective story, but you’d be surprised at how many will half-arse leaving clues for the audience and be content with putting everything into the big reveal. Here we can pick up the pieces alongside Enola in order to make the connections ourselves, and it’s all laid out in a way that leaves you wanting more, wanting that next piece, until it all comes together in a way that can surprises but also makes sense with the information you’ve been given.

However, all these are things that wouldn’t work quite as well without the right actor at the centre. Luckily, Millie Bobby Brown is wonderful in what might be her strongest performance yet. She also produces the film so clearly this is something of a passion project for her, and that enthusiasm shows. Throughout she gives little asides to the camera, perfectly in keeping with both director Harry Bradbeer’s past work on Fleabag as well as the narrative voice from the original series of novels by Nancy Springer that the film is based on. It’s a charming element, one that puts us the audience in a role of Enola’s confidante who get to be in on the joke and the adventure. She is a protagonist that you can root for; highly intelligent, full of spirit, and deeply caring, but in many ways naive about the world and how things work. She can misjudge a situation and need help. Such help comes from her equally great supporting cast.

Whilst Louis Partridge does look a bit too young to be a Lord, his Trewksbury is both a nice foil to Enola’s pluck and also makes a matching pair with her as his story as a character is also about going against the grain of society’s expectations, even if not quite to the same degree. Enola’s personal mission that drives her story is to find her missing mother and Helena Bonham Carter is a delight whenever she pops up on screen, primarily through flashbacks to Eudoria’s education of Enola, and there is a wonderful warm chemistry with Brown that suits their oddball mother-daughter pair so well.

Then we come to the much more well-known Holmes siblings. Mycroft is a character who in the past has been boorish, or brilliant but lazy, but here Sam Claflin makes him genuinely despicable. He’s an embodiment of the society that Enola wants to escape; “proper” on the surface, but manipulative and vicious to those who don’t fall in line with their way of things. It’s one of the many ways that Enola Holmes paints its themes very broadly, but they are no less effective for it, highlighting not only opposing ideas of the role of women in the world but also progression versus stagnant traditionalism.

Sherlock ends up being the Holmes most on Enola’s side, recognising in her a kindred spirit and growing fond of her despite his usual detachment from people. It’s interesting to note that this is a Watson-less Holmes we are dealing with here as in many adaptations the doctor acts as a personal buffer when Sherlock proves to be impersonal. Here that kind of role in unnecessary and with Henry Cavill it is extremely refreshing to have a Sherlock Holmes that whilst intelligent and capable of fantastic deduction doesn’t seem to have a need to be an utter jerk at the same time. It is an aspect of the character that has become tired and we’ve seen it more than enough times. Here though is a Sherlock with a very particular potential; able to recognise his faults and maybe be willing to correct them. The use of this is something that the estate of Conan Doyle took issue with, claiming that Sherlock Holmes having emotions does not feature in any of the stories that fall under the public domain. But maybe, much like with many of the things we see in Enola Holmes, Sherlock is a character that could stand to do with some changing, and Henry Cavill is an excellent choice to do it with. In very small ways the film challenges Sherlock as a character, with one character noting that Sherlock’s disinterest in politics is only really possible for him because he directly benefits from the status quo. It’s interesting, and something that could certainly be explored further.

There is set up at the end for a sequel, something which would be more than welcome. Enola Holmes has the foundation for a truly fun franchise that has an entertainment factor that can be enjoyed by anyone and also has the substance and sincerity to make waves with its target teen audience in its message about finding yourself and being true to that, no matter whatever others may think.

“The future is up to us” indeed.

Enola Holmes is out on Netflix now!