It’s very easy to dismiss horror films, especially does that come up nearly hours into a video on demand search. With films meant to be intentionally bad, sequels and reboots that are actually bad, and a lot of disappointment in the genre, it’s rare to feel excited about horror movies nowadays. So, when I wanted something banal to watch in the background of working (my stay at home job running this lovely blog and other film related escapades,) and picked Trick r Treat, a film I wrongly thought was going to be naff and settled into background noise.

What happened after would shock you…

Ok. This is not a click bait article, what happened is that I was ended up being so absorbed with the film that I bunked off working for two hours to appreciate it in its fullness.

Trick r Treat is a somewhat of an anthological film that sees four stories of Halloween in a small town. With an appearance by a sack wearing child named Sam in every tale, the interweaving plot lines focus on a murderous teacher who has contempt for his trick or treating students, a legendary school bus crash that spooks modern children, a cranky old recluse who is terrorised by a young assailant, and a young woman who is looking to break her virginity on the fateful night…. What ghouls could spook them?

It’s difficult to balance originality whilst paying homage to classic horror films but Michael Dougherty’s film, in script and direction, creates this iconic movie in its own right. Balancing the right amount of thrills, chills, and comedy, Trick r Treat is a rambunctious affair that broils with entertaining premises that still have lavishes amount of gore and red stuff. The tales are lifted from different types of horror premises and seamlessly fit into one another without meshing into complexities. Raucously wild and hilarious, this marries supernatural evils and human ones too in a ceremony so lavish and fun, you’d be missing something to not enjoy it. 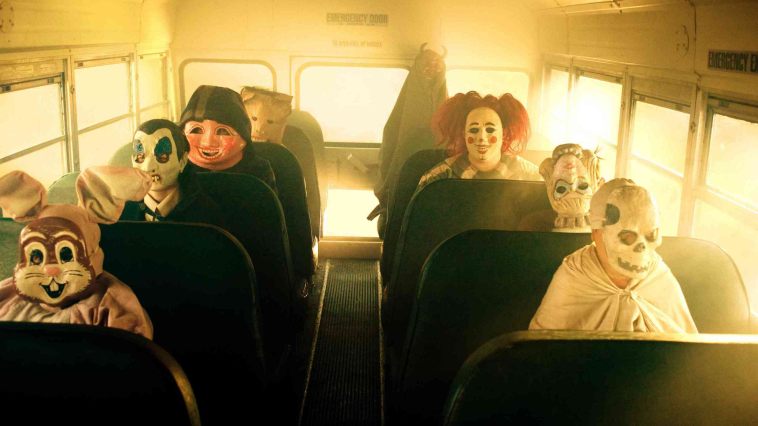 With actors such as Anna Paquin, Brian Cox, and Dylan Baker, there is a clear sense of everyone involved just having a blast here which echoes throughout the entire film. It has accrued a wide fan base and hopefully will have a longevity like it’s classic counterparts as it sits firmly on the must see horror film of Halloween. Just one note, however; always stick to Halloween traditions – you don’t know what people have planned this holiday….