I don’t think Charlie Kaufman likes film critics. In his film, I’m Thinking of Ending Things, derived from Iain Reid’s 2016 novel, he has Jessie Buckley regurgitate large sections of Pauline Kael’s review of John Cassavetes’ 1974 film A Woman Under The Influence, in particular those that dismiss Cassavetes’ writing and Gena Rowlands’ performance.

I have only read a Wikipedia summary of Reid’s novel, but I feel confident that it does not include this detour. Kaufman does not faithfully adapt Reid’s novel; instead he ‘Kaufmanises’ it, which is to say he keeps the broad structure – the staging points, car journey, visit to a farm, return journey, a stop for ice cream, a visit to a High School – but removes the generic thriller elements and makes everything else open to interpretation. Characters age suddenly. Incidents are reported but not shown. Questions remain unanswered. Much of the action is dialogue driven. I confess the first section made me nod off – long car journeys can do that.

Irish actress Buckley, who is having a terrific start to her acting career with Beast, Wild Rose as well as the television series Chernobyl and season four of Fargo among her credits, plays an unnamed protagonist, whose singular thought (in voiceover) gives the film its title. She has been in a relationship with Jake (Jesse Plemons) for barely seven weeks. He’s driving her from the city, where she works as a waitress, to her parents’ farm to meet them for the first time. We take the titular phrase to mean, ‘I want to leave the relationship’ but with Kaufman you cannot be certain.

As well as the structure, Kaufman respects Reid’s decision not to name his protagonist. Her backstory becomes suspect. We understand she has a job to get back to, but the young woman also claims to be an artist and a student. She shows Jake’s parents (Toni Collette, David Thewlis) her paintings, a series of landscapes, which she claims embody certain emotions. ‘But there are no humans in these pictures,’ notes Jake’s father, ‘if there is not a person looking at a sunset how do we know whether it is sad?’ On a larger scale, Kaufman poses a question to us: if he messes around with how he shows people and things – the climax includes a ballet interlude and there is a border collie dog that appears and disappears – will we still care?

Watching a film is an investment of time for the pleasure of spectacle and entertainment or, at the very least, enlightenment. The viewer seeks an experience. Part of this involves taking sides. We can either empathise with the young woman who believes that her relationship with Jake is not worth continuing or with Jake who hasn’t yet proven that he can make her sufficiently happy long-term. Kaufman doesn’t give us the choice. We are with the young woman, whose oft repeated refrain will eventually (we think) result in a conversation about her feelings. She is the proverbial ticking bomb. When will she tell him how she feels? How will he respond?

For his part, Jake is understated. His feelings bubble beneath the surface. As the ice cream incident shows – the store is renamed Tulsey Town in the film, rather than a branch of the real-life chain, Dairy Queen, as in the book – he is awkward and shy. Jake is the kind of guy who would call his quiz team ‘Brezhnev’s Eyebrows’ (not his first choice, we discover) and does not know how to talk to women. His relationship with the young woman is based on attraction. In Kaufman’s film, his background (on a farm) is suddenly hers; she discovers exact replicas of her paintings signed by Jake, the images of which have disappeared from her phone.

The introduction of Jake’s parents is extremely protracted. Having waved to his mother from outside the farmhouse, Jake decides to give the young woman a tour, showing her the lambs, including some lying dead and frozen (‘don’t worry about them’) and describing pigs eaten by maggots. Then stepping into the house, they wait for the parents to appear from upstairs – only they don’t. This diversion from social niceties is original. Kaufman is playing with movie conventions. We normally expect characters to be introduced in their environment straightaway. Kaufman unsettles us – there is also a conversation about slippers – and draws out the inevitable.

Collette is extremely unsettling herself. As the mother, she laughs artificially. Jake had told the young woman not to expect a spread; his mother had been ill. However, there is one, a meal which significantly no one eats.

Asking Kaufman to do naturalism is like requesting Ken Loach should do a Hollywood musical. Kaufman constantly reframes what we think we are watching. In a scene staged from maximum awkwardness, Jake’s father shows the young woman Jake’s boyhood bedroom and starts talking about sex, whilst displaying signs of Alzheimer’s. He has taken to labelling things. ‘There are signs everywhere,’ he says portentously, including a book of Pauline Kael criticism (not, I think, Reeling in which her review of A Woman Under The Influence appears).

When the young woman recites the review – partly in the context of her having drunk a lot of red wine at dinner – it is at once a criticism of people who parrot reviews from others as if they were their own as well as a condemnation of Kael’s cruelty. Why can’t great performances be fragmentary, Kaufman appears to be asking. Don’t we live our lives in inconsistent fragments?

Critics habitually universalise their personal response, claiming theirs as the correct reading. It is a delusion: not everyone experiences the same meal the same way, so why should a reading of a film, book, painting or piece of music be absolute? We enjoy the critic’s argument – their wit and hyper-sensitive insight. But they also give us an ‘oven ready’ opinion, a means by which we can dismiss a work, a performance or whatever. Critics also play to confirmation bias (I told you it was bad), which we indulge at our peril. 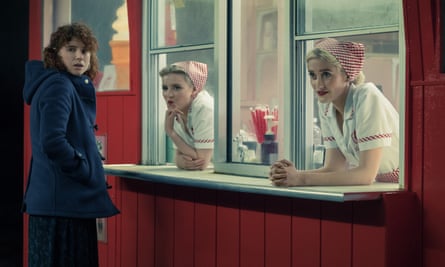 This entire scene grated for me, especially as I have been influenced by Kael’s writing since the early 1980s – I saw her in person at the National Film Theatre in July 1982, at which she spoke for two hours, then continued speaking to a small crowd for a further hour. Kael’s opinions are based on a high expectation of cinema as an artform and a decision to point out lofty but vacant filmmaking. I was more thrilled by Kael’s praise for a film than her damnation – describing a scene in The Right Stuff in which John Glenn (Ed Harris) stands up for his stammering wife (Mary Jo Deschanel) as the best ‘advertisement for a marriage’ that she had seen and so on. It was these reviews more than trailers that helped me look forward to cinematic pleasures to come.

‘You don’t have to go forward in time,’ the young woman is warned at Tulsey Town in a line that would not be out of place in a David Lynch film but otherwise makes little sense. Reid’s novel dealt with childhood trauma. Kaufman jettisons this. Jake’s mother praises him for having been given a diligence pin at High School, for sticking at things even if not being a high achiever. It is a non-award. Awards imply a fixed judgment – that Meryl Streep is the Best American actress working in cinema, for example – and are ultimately unhelpful. (What about Amy Adams?) But they also pin a person to a type of achievement, rather than accept they can be polymaths. Kaufman doesn’t progress the story to a logical conclusion. He wilfully refuses to do so. The final image is of Jake’s car covered in snow.

I’m Thinking of Ending Things does not deliver genre pleasures. I experienced the film as drawn out and tedious, with its big finale paying homage to the ‘set within a set’ of Kaufman’s directorial debut, Synecdoche New York. Instead Kaufman separates the pleasure from the framing apparatus. You can enjoy the ballet sequence or some of the behavioural comedy. He celebrates the untethered, which accounts for the assault on the ‘farmy’.