Academy Award-winning actress Regina King takes a step behind the camera to direct the poignant One Night in Miami.

The speculative drama, based on a play by Kemp Powers (who also writes the screenplay here,) is set in 1964. It revolves around a fictitious meeting where boxer Cassius Clay (aka Muhammad Ali,) singer Sam Cooke, and political activist Malcom X celebrate Clay’s win over Sonny Liston in a Miami hotel room.

King directs this movie with an utmost brilliance. Whilst the script and staging, at times, can still feel as though it is taking place in a theatre, King and Powers (a brilliant name combo, by the way,) successful adapt this story for the screen. This is a fictional account but it is true that all four men were friends at this time. Therefore, it feels like a deep intellect and realism in fleshing out these differing men. Not to just be in a room together, but to be good friends that clash over their opposing views.

Sinking us back to the sixties, the movie feels fluid and nuanced to how it tackles inequality and racism. The broiling of ideas and arguments that black men and women have to face are laid out between the dusty sheets of a dingy motel room. To play the white man’s game or to fight it at every turn.

One Night in Miami also shows how these famed men still deal with racism; Cassius Clay is constantly booed by the crowd. A meeting that Brown has with an NFL league boss ends with a deafening and shocking blow. Sam Cooke performs at the Copacabana to a crowd that is more interested in cigarettes and their conversation. And, of course, Malcolm X is met with violent opposition, to the extent that he has to walk around with bodyguards. This type of living is criticized, in a time that was not too long ago, either.

The performances are pivotal to the success of this film with each actor having to play a famous face. Yet each embody these men so well that they even move past their moniker to become simply men – human’s dealing with their struggle. 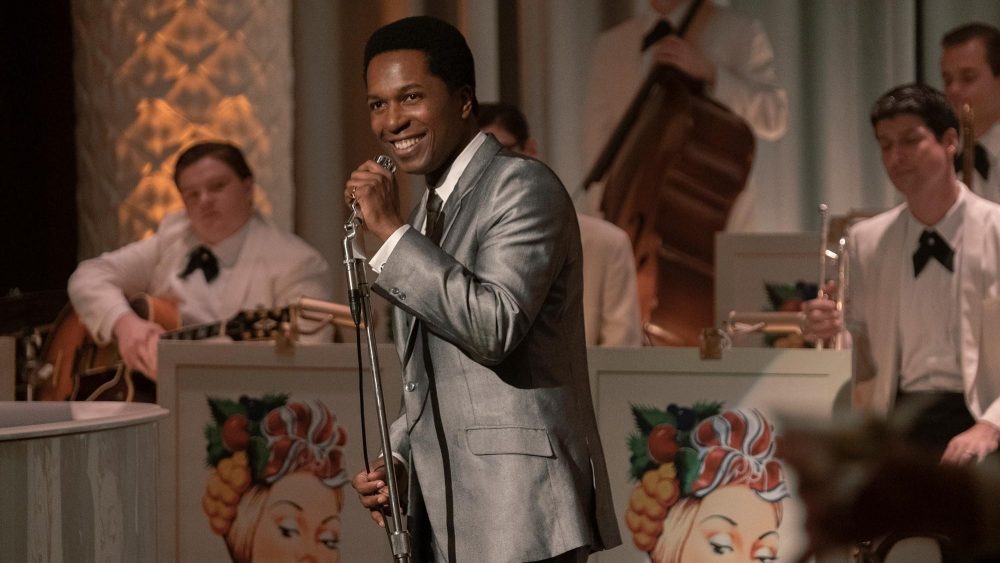 British actor Kingsley Ben-Adir is a solid Malcolm X.  Not only does he have a looming presence as the controversial historical figure but also manages to break that image down. Ben-Adir slices to the core of Malcolm X such as his own difficulties with his religion, his message, and how his words and activism affect his family. At the same time, in this lowly room, he is attempting to get these men in front of him to listen to his perspective and how they are near powerless.

Hamilton’s Leslie Odom Jr plays singer Sam Cooke whose opinions differ with Malcom X’s and throughout the film they clash. Odom Jr is electrifying, portraying a man who has scraped his way to the top yet still feels out of place in his successes. The soul singer, performing to chattering rooms is smooth yet incensed and Odom Jr conveys this perfectly.

From Clemency to The Invisible Man, Aldis Hodge has an incredible presence and here he continues. In a sublime cutaway, Jim Brown listens to the arguments from the bathroom and his thoughts are etched on his face subtly. A sigh, an eyebrow twitch, a silence – saying more about Brown’s stance than any script could. These different voices swerve and jab like a verbal boxing match, not any less heated than the two fights Clay fought at the beginning of the movie.

Speaking of Clay, Eli Goree is fantastic. In front of the cameras, Clay spars with both his words and fists and his excitement following the win electrifies the room. At the same time, he is moving over to Islam and finding a calming voice.

In these men, King finds a way to lift Powers words to the screen. In herself, she accomplishes so much with an almost one-room setting. Framing all men so they are together in nearly every shot when in the room, King is clever to give the stage to these performers and allow the politics and power to flow.

This is a movie that simmers until the powerful climatic end that will send shivers down your spine.  An assured directorial debut from Regina King, and one to watch over award season.