Alcohol is very entrenched in a lot of cultures. Especially the UK. Our pubs have become a necessity and we treat it like an almost daily ritual. Get up, work, have a pint at the pub. All our celebrations are tinged with wine, beer, spirits, and more.

Apparently it’s the same case for certain Scandinavian countries such as Denmark. Happy, sad, angry, or perhaps just for confidence.

This is the point for Thomas Vinterberg’s dark comedy Another Round.

Mads Mikkelsen stars as Martin – a history teacher who has hit a bit of a rut in his life. His wife has taken nightshifts, seemingly purposely, his kids don’t interact with him, and his students are bored by him.  At a meal, one of his colleagues and friends proposes that humans would be better off if they consumed alcohol at a low level. After all, so many great men, artists, and leaders have done so. So the four of them decide to conduct an experiment, secretly drink and work throughout their lives, seeing if it changes anything. Thus the madness starts.

Another Round start out quite charming and fun. The frivolous drinking and results are fun to begin with like any dark comedy such as Filth. As the men sneak around school and their homes, trying to secret consume alcohol and finding that it does insert a bit more energy into their lives is good to watch. 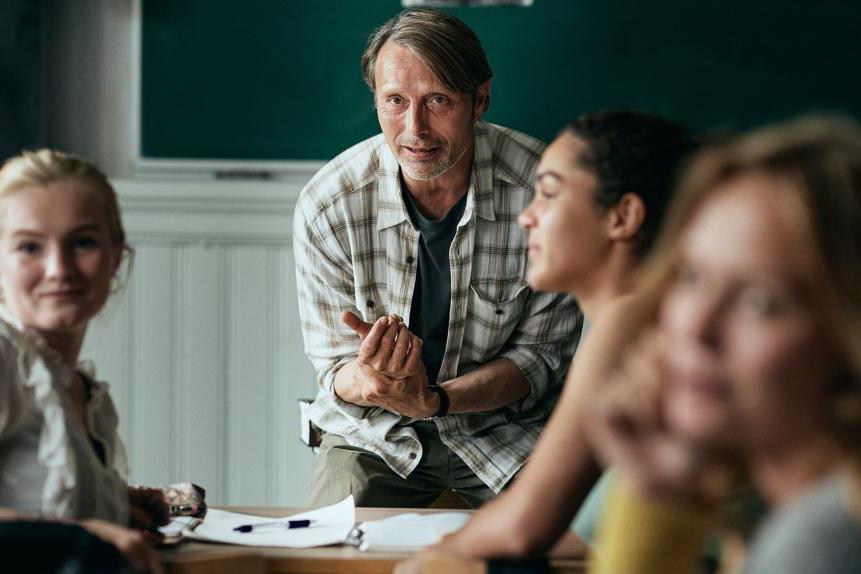 Yet the message is unclear and it’ll leave you with an uneasy feeling. There are some gross implications that drinking alcohol regularly could be beneficial for your life. At one point, one of the men even encourages a student to take a couple of sips before an exam. Vinterberg does try to address alcoholism but it is skimmed over, replaced by more antics. This feels problematic. Of course, it is not the job of the film to preach about alcoholism, but it feels disconnected from the issue and more of an inspiration for all of us to attempt this experiment.

Mikkelsen is phenomenal though and imbues a quiet yearning from the beginning as Martin has completely forgotten himself and cannot find where he has lost the threads. As he comes out of the shell he has built for himself, Mikkelsen masters this new sense of being and purpose for Martin. The new rambunctious teaching, the trips with his family, and more.. Another Round is a great watch if you focus on Mads Mikkelsen alone, especially as he is allowed to bust out his moves towards the end.

Mads Mikkelsen is on fine form but cannot drown out the bigger problems of the movie.

Another Round is out in cinemas Friday.