Warning: This article contains spoilers for The Haunting of Bly Manor.

Let me start by saying this – I don’t like horror films.

Ok. I’m just kidding. I adore horror movies, and subsequently, television shows. There is just a part of me that enjoys being scared by the supernatural, even though I am always fearful. Looking for spectres out of the corner of my eyes, I adore that creeping shiver of the unknown, sliding down your back at night.

A couple of years ago, when Mike Flannigan’s The Haunting of Hill House came out, me and my housemate consumed it with obsessively. We switched the lights off, snuggled under our blankets, while we pointed out secret ghosts in the background. We screamed at the jump scares with our hearts pounding thick, hurried beats in our chests. But we also cried, the losses of the Crain family opening up our wounds and scars, allowing us to grieve alongside them. After drying our tears, we both concluded that Hill House was a masterpiece.

Flash forward to 2020. My housemate moved out, the world is suffering from a pandemic, my job is non-existent, and I’ve felt the loneliest that I have in years. A spectre of myself shuffling around the corridors of my flat. It has been a hard and cruel time for us all. In these moments of hardship, it is only natural to turn to horror to provide us with frightening escapism. 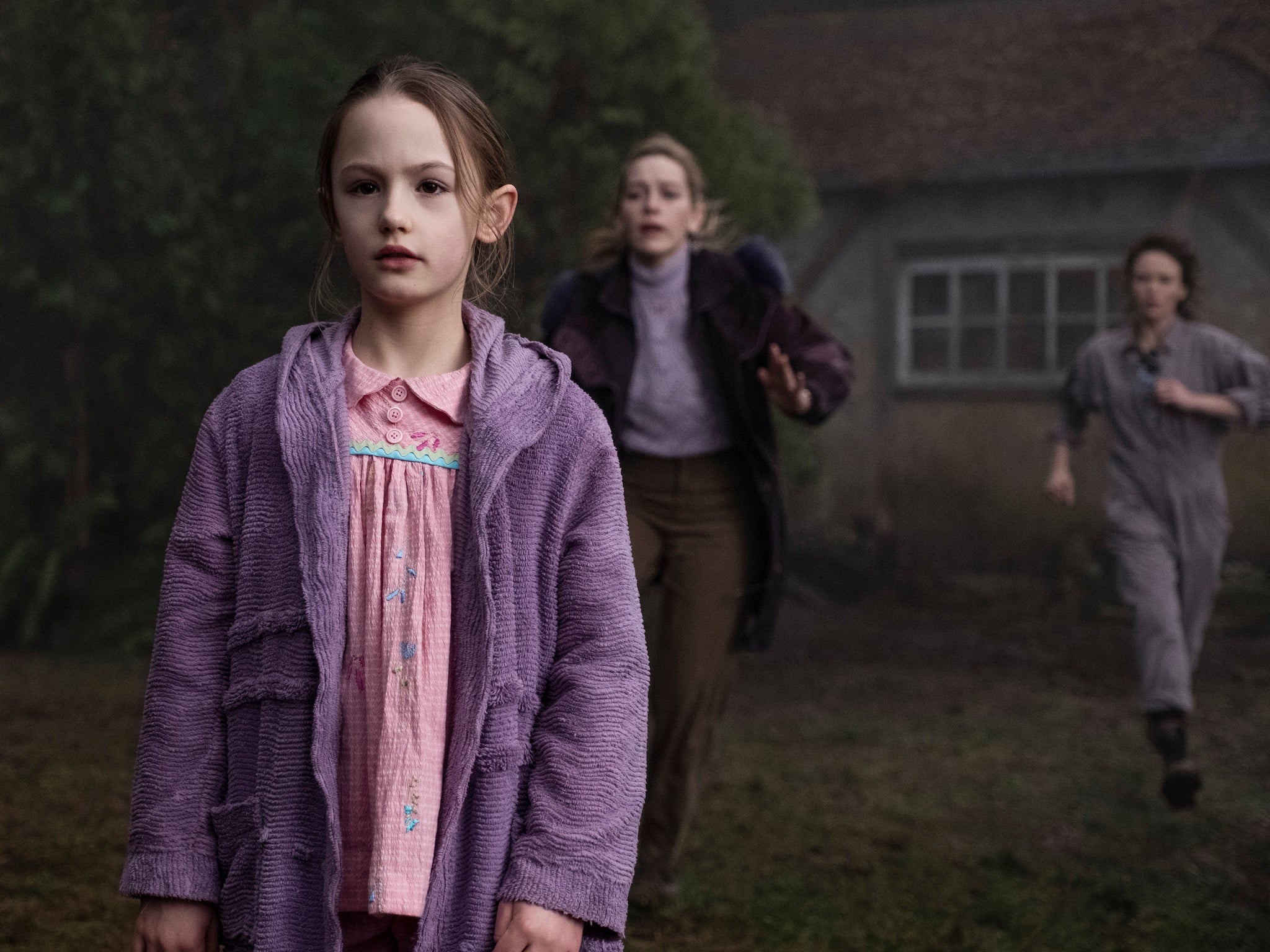 Following Hill House, the excitement for Flannigan’s The Haunting of Bly Manor was paramount. Many folk, including myself, were eager to enter into the director’s terrifying world of ghosts. Yet, it was clear from the first episode, that Bly Manor was going to be a different beast. For some, this was an obvious disappointment. For me, I sank into Bly Manor as though I were wading into a mist covered lake, ready to be immersed in the waters and take my place at the bottom, filled with obsession and need.

I’m currently watching the show for a third time within the span of a week (it arrived on Netflix on the 9th October) and that is something I never did with Hill House, no matter how much I praised or worshipped it. I crawled into Bly Manor’s glue trap and did not know that I was also stuck. Only, unlike a crawling mouse or an ill-fated ghost, I am happy to stay here in this new obsession.

But why Bly Manor over the perceived Hill House?

Well, this article serves as somewhat of an ode and/or investigation to answer that.

Bly Manor sits in the English countryside, and started its genesis in Henry James’ famed book The Turning of the Screw. It has been adapted many times; the best being 1961’s Deborah Kerr fronted thriller The Innocents, where, like the book, any supernatural happenings are ambiguous. They could be real or they could be conjured in the mind of the repressed Governess.

Here, in this new televisual interpretations, the ghosts are very real. The mystery, then, lies in how the ghosts came to be and why are they using children to exact their bidding. The series is set in 1987 and sees plucky American Dani move to England for a fresh start. She is enlisted by pompous and rich Henry Wingrave to look after his niece Flora and his nephew Miles, who he has abandoned in his late brother’s summer manor of Bly. When Dani gets there, she is immediately concerned by the youngster’s behaviour. Flora looks off at invisible things whilst Miles talks more adult than any boy of ten should. As Dani begins to unravel the mystery of the manor, with the help of Chef Own, Housekeeper Hannah, and Gardener Jamie.

It will be very easy for me to pick and prod at this movie, bit by bit, moment by moment. Is the acting good? (Yes.) Is the story enticing? (Yes.) Is it directed with flare and ingenuity? (Yes.)

I shouldn’t entirely dismiss these things. For example, T’Nia Miller as Hannah is exceptional. She is a upstanding housekeeper who lives at Bly, stricken with sadness following the death of her bosses Charlotte and Dominic. Paired with Rahul Kohli’s Owen, a likeable blossoming relationship, and Hannah’s story comes into fruition. Episode 5, which deals solely on Hannah, is a writing and directing highlight, seeing the housekeeper flit through memories as she tries to solve a big problem. It unravels the truth greatly and Miller is utterly spell-binding as a somewhat confused but utterly capable woman – Kohli is a pun-spewing, comedic relief which is something we didn’t see in Hill House a lot, which makes the tragedy that befalls the pair of them that much more intense.

The Newton Brothers produce a bewitching score and, even if you have read The Turning of the Screw, there is still enough mystery to keep you watching. 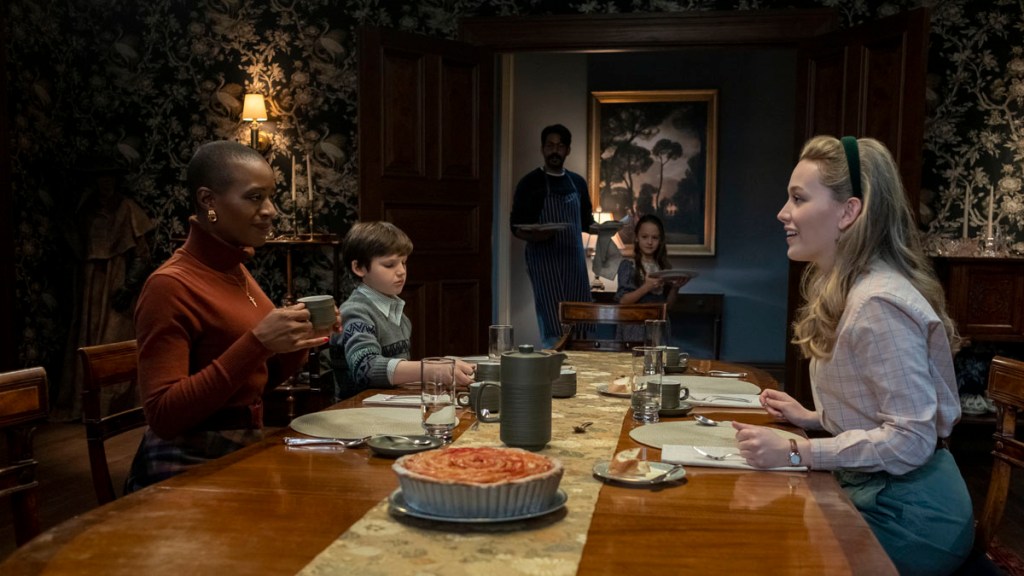 There are also flaws in Bly Manor which I must mention. The main detraction are the accents from non-British actors such as Carla Gugnino or Henry Thomas which are iffy and distracting upon first watch. Even Oliver Jackson-Cohen, a London based actor, inexplicably tries his hand at a Scottish accent for his Peter Quint. But these sins are forgivable. Hell, I have become so obsessed with the show that I cannot write anything without hearing Guidagino’s dulcet faux-Yorkshire tones speaking the words in my mind. I couldn’t even revisit Hill House without missing Thomas’ super-posh Henry, even though that show is the best of his work.

However, it is within its themes and emotion where Bly Manor strides beyond Hill House.

“It’s a love story, not a ghost story,” says a soon-to-be Bride to a family friend in the last episode to which the narrator says, “it’s both.”

Not a truer thing is said in the entirety of the show.

Have you ever felt that ache? The knowledge that something within you is missing, like a hole in your soul. The memory a legion on your mind in which the pain would never go. The thoughts of a time before that still stalk your dreams. Joy and sorrow deep in your marrow. Who you are, who you were, and who you ever loved floating in and out of this space within you. Have you ever felt that?

Thematically, Bly offers a different type of haunting to Hill House. The Crains were consumed by the building. It ate at them little by little until they gave into it: Olivia first, Nellie second, then finally, Hugh.

For Bly, the building has less teeth and more of a lighter touch. It is a hand once was delicately brushing down your spine, it is the lips of someone gone still kissing you deeply, and it is the memories of moments and love that are scattered throughout us like confetti. We are who we are in the eyes of other people. Sometimes we are bound to them through love, obsession, or hate.

In Dani and Jamie’s story, the pair come from troubled pasts and come together gradually over the course of the show. The chemistry between them is sure to ignite anyone’s cold heart. Victoria Pedretti, as though she wasn’t heart-breaking enough as Nell, is a brilliant Dani. She is an optimist with tragic secrets that she is able to heal with the sarcastic Jamie. Amelia Eve as Jamie is fun and fierce yet tender in places, delivering a brilliant monologue about Jamie’s history in Episode 6. Their relationship sparks instantly and burns slow until it is incandescent across the whole series. In the final episode, we are given almost a decade of their relationship in important moments as Dani is gradually taken over by the Lady and the Lake, eventually descending into a watery grave and leaving Jamie to tell their story. It is a soft and sweet love and life until the tragic end.

Their love is contrasted by the other centric pairing, ghosts Peter Quint and Rebecca Jessel (Oliver Jackson-Cohen and Tahirah Sharif.) Both tragically die, Peter before Rebecca, and constantly possess Flora and Miles to live again.  This is a ferocious relationship. Heated on first meet, it becomes passionate very quickly but turns sour when the jealous Peter cannot let go of her for even a moment. Even though there is a good understanding of Peter and why he grasps too tightly onto things he cannot have (namely love and money), he is the biggest villain of the show, manipulating Rebecca even beyond the grave.

Each love is a mirror of another, like a ripple of memories and moments from underneath the surface. Whether it is the dead, confined to relive the world they knew or the alive, reminiscing about what was. Each pairing is connected and contrasted. Both have deep rooted infatuation, one is definitely pure love, and both see one lover flailing and screaming over the corpse of another in that dreaded lake. While Peter let an unwilling Rebecca drown, Dani could never let a willing Jamie die. These opposite reflections will, indeed, ripple through you too.

Even Viola, the Lady in the Lake whose faceless shadow takes unsuspecting victims is bound by her heart. In Episode 8, we are sent to the dark origins of Bly.  Played by Katie Siegel, Viola was once the Lady of the Manor, in a good marriage with a beautiful child. However, she grew ill and somewhat monstrous, eventually being murdered by her own desperate sister. Her spirit lay trapped in a trunk, waiting for her daughter to open it which she never does. Therefore, Viola is shattered after her spirit is, unknowingly, tossed into the Lake. Emerging from where she lays, she stalks Bly driven by the love for her daughter to the point it becomes rage-induced and murderous. When she fades away, as many ghosts at Bly do, it is all that drives her corporal vision. Yet the devotion still exists, even after Dani frees her from her routine.

The devotion still exists. Even after everything has long since diminished, our love leaves an echo, a stain, on the world.

Needless to say, The Haunting of Bly Manor has become my favourite of the spiritually paired shows. To me, this is true horror because it feels more palpable and haunting. It’s like dying over and over and over again, addicted to the most basic of drives – the need to love and be loved. What lonely writer wouldn’t be entrenched by that feeling as it floods in? Allowing themselves to be pulled to the bottom of the lake.

The Crain Family, siblings especially, may have become this tight-knitted group who have learned through their collective supernatural experiences, coming through their grief more open and honest and happy. Hill House was their strife and they came through the other side, ready to face the new baring teeth of the world.

Bly Manor is a more melancholic affair. A home where your grief and mistakes follow you inwards and trap you inside. A place where we are forgotten but pain and anguish are not. The finale episode is drenched in tears and heartache. It broods with limited love and unhealable scars. Yet it gives us hope. That even though we may be destined to fade away – to lose our identities and memories and loved ones –those who loved us most will carry us forward in the stories we tell.

Whether they be stories of ghosts, of love, or a simple obsession with a singular television show.