The best horror movies are ones that tap into something more than simple scares. Night of the Living Dead features the breakdown of society with an undercurrent of Civil Rights era tension, 2019’s Invisible Man is overtly about abusive relationships, and Pulse (Kairo) expresses loneliness and depression with soul chilling truth. When you can scare people on multiple levels; the visceral, emotional, and psychological, it stays with you, and affects you so much more. As such, Natalie Erika James’ Relic might be the most powerful horror movies of the year.

When her mother Edna (Robin Nevin) goes missing, Kay (Emily Mortimer) and her daughter Sam (Bella Heathcote) go to the old family home to look for her. There Edna returns, but is acting strangely and seems certain that there is something else in the house with them. Is there a presence in the house, or is it Edna’s dementia taking a stronger hold on her?

The thing about Relic that makes it work so well is that its horror is, for the most part, real. There’s just so much in the film that will be tragically familiar to some. Things like Edna’s post-it notes to remind herself of things, her sudden and occasionally violent mood changes, and the easily dismissed claim of someone being in the house, all these things are worrying as indicators of cognitive decline and also tap into a level of fear that nobody likes to talk about because it’s so present and genuine. It’s one of the scariest and most emotionally difficult things a person can go through; seeing someone they know and love become less of themselves and less of a functioning person, not to mention terrifying for the person themselves experiencing themselves slip away. That fear is also exacerbated by the fact hanging over all of us that these are things that one day may happen to us too. This means that, unlike possessed dolls or a cursed videotape, the terror of Relic cannot be so easily dismissed when you go home and turn the lights out. It’s a fear other filmmakers have tried to explore, most notably M. Night Shyamalan in The Visit, but where that ended up being ineffectual and borderline insulting in places, Natali Erika James has a much better handle on the subject matter. Everything is treated with respect and never forgets that even when bringing in the supernatural element, because in the midst of the odd behaviour and claims of intruders there is that terrible thought at the back of your mind about the implications if it is something more than that, if there actually is somebody, or something, able to come into a home secretly and with malicious intent. The real and supernatural are blended so well here, but with the supernatural never being an easy out or explanation for the real-life horror elements.

Relic so has an appropriately dreary mood, something not normally associated with Australia. Everything feels cold and disquiet, which in turn leaves you feeling as vulnerable as the characters. It’s cliché to refer to the house in films like this as being characters themselves, but it’s honestly apt here, especially during those times when the junk filled old family house feels alive with its various noises and quirks. The visual motif of mould and bruises spreading and tainting is a very evocative one, bringing to mind the film’s themes of decay and decline. 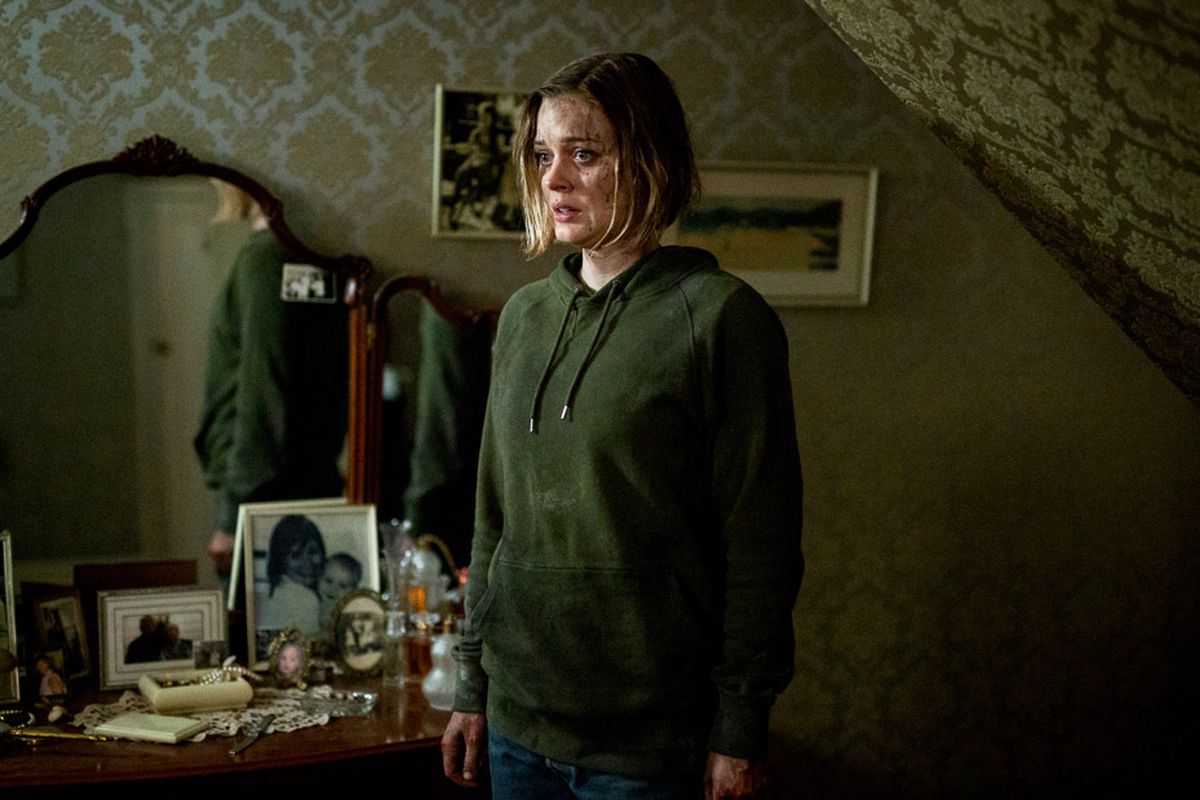 Emily Mortimer as Kay is excellent. She is grounded and sensible, but we see the cracks start to appear as more strange things start to happen. One scene in which she breaks down after visiting a care home that Edna may have to go into is especially heart-breaking. She is devastated by the thought of her mother who once took care of her needing to be taken care of in such an impersonal environment and losing all of her independence, possessions, and everything she spent her life building. It’s another touch that can be all too horribly real for many, and Mortimer plays it just right. Similarly, Robyn Nevin is a kind of perfect storm of uneasiness and sadness with the merest touch of sinister. You can feel that the two have had a difficult relationship with its share of emotional hurts and things left unsaid. The weaker link in the trinity is Bella Heathcote as Sam. It’s not clear whether the issue lies with the performance itself or whether the character of Sam just isn’t as well written or defined as Kay or Edna. It is a shame, because the concept of horror affecting a family across generations is a very compelling one.

Relic is the kind of horror movie that backs up its scares with genuine food for thought. Not since Hereditary has a film examined family difficulties with such compelling skill, it will leave you chilled to the bone.

Relic is out in cinemas and digital now.