As a practising Muslim and rapper in his own right, Mogul Mowgli represents nothing less than an intensely personal journey for its leading man and co-writer Riz Ahmed. The story of an artist whose life closely parallels Ahmed’s own, with his ambitions and needs every bit as fragile. It is a film that demands an intimacy with Ahmed beyond what most actors might be willing to put themselves through. To be shown at their most physically and emotionally vulnerable.

Directed by Bassam Tariq, in his scripted debut, Mogul Mowgli centres on Zed, a rising rapper on the cusp of international recognition. He lives in New York with his beautiful girlfriend and is ready to embark on a world tour when he decides to visit his family in the UK. The visit however proves ill-fated as Zed begins to feel the crippling effects of an auto-immune disease attacking his body. Barely able to stand he falls back on his parents, the people he is so desperate to help through his music, just to perform basic human acts. All while facing the knowledge that his career is crashing around him.

Zed’s journey though is psychological as well as physical. With the vibe of a music video we see him haunted by an elderly figure from his childhood. A symbol of Muslim tradition that Zed has turned his back on. In flights of fantasy he confronts the black rappers who look down on him for appropriating their culture. His victory cut short by the arrival of RPG (Nabhaan Rizwan) a cartoonish upstart, who threatens to supplant his career. These are sequences in which Tariq deviates from the static mood of reality to take on an energy and beat of their own. Surreal and powerful and yet never losing sight of Zed, the tormented figure at their centre.

When not in the elevated reality of Zed’s mind, Mogul Mowgli adopts the feel of a kitchen-sink drama. All handheld camerawork and sterile colours. It’s no less engaging for how divorced it is from Zed’s fantasies (or indeed his stage performances where the fantasy becomes reality). These are the spaces in which Zed is able to articulate what his anguish means to him. The mourning for a career he never had. The fear that he cannot provide for his parents. The conflict between life as an obedient Muslim and as a member of the hip hop scene. It is where the drama ceases to be metaphorical and sits at the foreground. 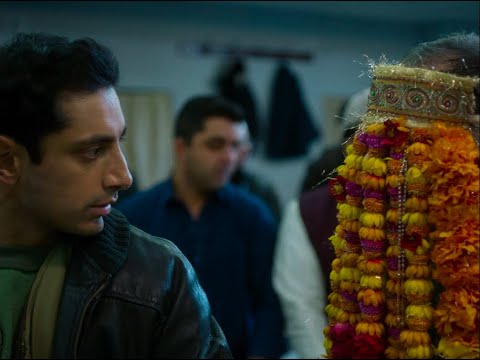 Crucially all of this is written and performed with raw and natural emotionality. Not the high passions of melodrama but the weak and understated pain of real people with real problems. Ahmed presents perhaps his most grounded and sympathetic performance to date as someone who has succeed through all conflicts, only to be cut down by a cruel whim of biology. His conversations with his parents, usually framed around an embarrassing bodily function they must help him with, speaks volumes about the complex relationship between them. They go through the motions of a familial act mired in mutual frustration.

Let’s hope with Mogul Mowgli that Ahmed has not articulated all of his experiences as a Pakistani-Muslim. Though if this did represent an artistic peak for the actor it would undoubtably be remembered as a high one. Instead the film best represents Tariq’s emergence as a director able to marry traditional ethnicity into a thoroughly modern setting and story. An electrifying debut and promise of exciting things to come.