Crap movies are in abundance during the Christmas period. Because nothing says capturing the stress, love and tinsel than sandwiching awkward acting, a terrible story line and truly emotional moments over turkey and crackers. America is famed for churning out as man dullard based festive romps that head straight to the television like an elderly relative after five Sherries. The fluffy, gooey, overtly sentimental film farces make you squirm in your tight ill-fitting Christmas jumper. And since Sky have released their Christmas 24/7 channel, there are plenty of g movies. Much like this one.

Love at the Thanksgiving Parade goes something like this; in the chilly city of Chicago, a young vintage wearing woman named Chipper McHappyson (actually, Emily Jones but I like the name change) is the key organiser of the Thanksgiving Parade. However, due to the lavish amounts spent, the town bring in development consultant Unhappy Disgruntleson (Henry Williams but again, you get the point). As Emily feels at a loss trying to convince him that her parade needs the funding for 23490237402 golden Santas and 30432740237 silver peacocks for the happiness of the children and community. But as they grate against one another, it’s clear that they are falling for one another. 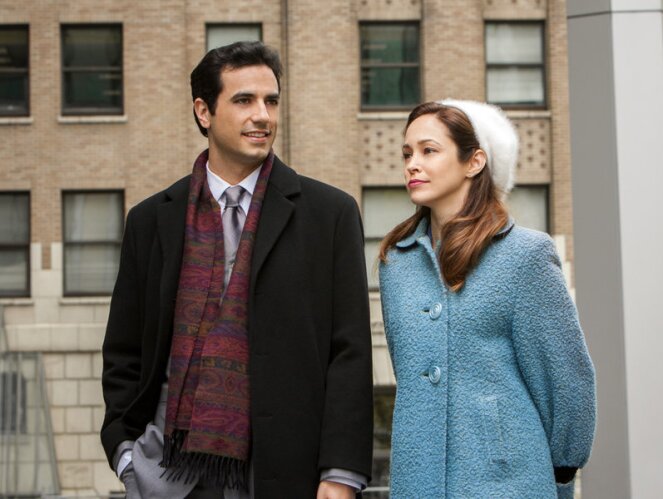 It has everything a lower budget Christmas movie (or, actually, a higher one) has. It has romance where they fall completely in love with each other despite being poles apart. The performances are ludicrously hammy, as they battle against one another’s ideals, they strain over some convoluted plot that all smashes home this “festive holidays are ah-ma-zing” sentiment that is sickly. It’s predictable, the minute they clash is the minute you can see them boning. And it helps that Emily is dating this dweeb over Skype who is a bit of a wet blanket next to the smouldering Henry. There is also an overabundance of tragic backstories that is meant to pull them together but when they pull out another trump card, you know they are just bating you to clench your pulsating heart in your chest like “isn’t it great they found each other?” It’s strange despite its silliness, it all works. As hammy as they are, both Autumn Reesner and, believe it or not, American Mary’s Antonio Cupo have this alarmingly sweet chemistry together as Reesner enthuses Emily with this insanely likeable personality. You’ll have to be the scrooge for it to not kindle at your soul and spread a bit of warmth this winter’s month. And while it twists and turns, going too far in some points, there are poignant moments such as Emily’s reason for wearing vintage or the actual truth behind Harry’s stiffness (hia poise and disposition.)

Yes. With Love at the Thanksgiving Parade, you pretty much get what it says on the tin. In this tin is the sickliest syrup that you’ll want to smother Cupo in. Really, it’s pleasant and charming despite a little voice in your head saying it was pants.

You’ll love it though. I promise you.

Love at the Thanksgiving Parade is available on the Hallmark Channel