“I heard this story about a fish, he swims up to an older fish and says: ‘I’m trying to find this thing they call the ocean.’ ‘The ocean?’ the older fish says, ‘that’s what you’re in right now.’ ‘This’, says the young fish, ‘this is water. What I want is the ocean!’”

Pixar Animation Studios’ maturation and increasing desire to address life’s big questions has been a fascinating journey to observe. In 1995, the fledgling studio released a computer generated animation about toys and asked us, buoyed by a great spirit of fancy free adventure, to consider the importance of childhood possessions to us growing up and – more interestingly – to entertain the notion of our existential importance to those vessels which we thrust so much of our youth and spirit and dependence upon. In the years that followed, Pixar would use a world of monsters to teach us about attachment and love, the expanses of the ocean to offer rumination on parenthood and our responsibility to let our children grow both with us and apart from us, the near apocalypse of the world as we know it to strip connection down to its core elements, and a puppeteering rat’s bromance with a weedy chef in Paris to demonstrate the true essence of inspiration and the life-affirming power of a driving passion.

In 2009, Pixar shifted gears with Up. Suddenly, abstraction of the animation studios’ thematic preoccupations gave way to a work of art designed with the sole purpose of eliciting as much emotion from the viewer as possible. Through simplistic, geometric character design work, and ambitious, complex, emotionally challenging dialogues woven throughout on grief, love, loss, and learning to live with life when you reach the point where more seems to be taken daily than given, Pete Docter seemed to reach out an open hand to children and adults alike and welcome us to engage with mortality and existence in a world reflective enough of our own to feel vital and recognisable, yet colourised and visualised in such a manner as to still allow our imaginations and expectations of entertainment and escapism to be satisfied. It was a masterpiece that deeply moved millions worldwide, and opened the door to utilising the medium of animation to hold the kinds of “adult” conversations more traditionally reserved (at least here in the West, because frankly Ghibli over in the East had been tackling “the big stuff” in animation for a couple of decades by the time Docter delivered Up) for live action fare.

In the decade since Up, films such as Inside Out encouraged us to explore and interrogate our understanding of how emotions themselves work on a fundamental level, whilst Coco grappled with life after death and the recent Toy Story 4 made of an unnecessary sequel an extraordinarily nuanced case study of existential crises as experienced by a sentient spork. Whilst Pixar have occasionally, albeit successfully, fallen into the sequel trap, dredging back up beloved worlds such as that of the aforementioned Toy Story as well as Monsters, Inc. and Finding Nemo, as technology has advanced to allow animation to grow increasingly close to a singularity with real-life, Pixar have seemingly been building towards a revelation that has been teased in minor masterworks and meaningful pieces of storytelling that touch on the core of what it is to be human.

The revelation Pixar have been working towards is realised with Soul. When you have asked an audience to emotionally invest in toys, to empathise with paranoid fish parents, to accept cars with eyes on their windscreen instead of their lights (WHERE THEY BELONG!!), and to emotionally engage with the concept of emotion, all with a through line of coming closer to understanding what it is to be alive, the end of that particular line of existential enquiry is surely an odyssean journey into the depths of the soul itself.

Directed and written by Pete Docter and Kemp Powers, Soul centres around Joe (Jamie Foxx). Joe is a middle-school music teacher in the heart of New York, a jazz musician whose passion for the art was born in childhood and whose free expression of that passion has seemingly grown more and more restricted and diluted as time has passed by. He listens to half-interested students half-interestedly hammer out jazz tunes, and the highlight of his working day is the sight of a twelve year old girl riffing improvisational solos that she has yet to discover the meaning or purpose of yet to her herself. 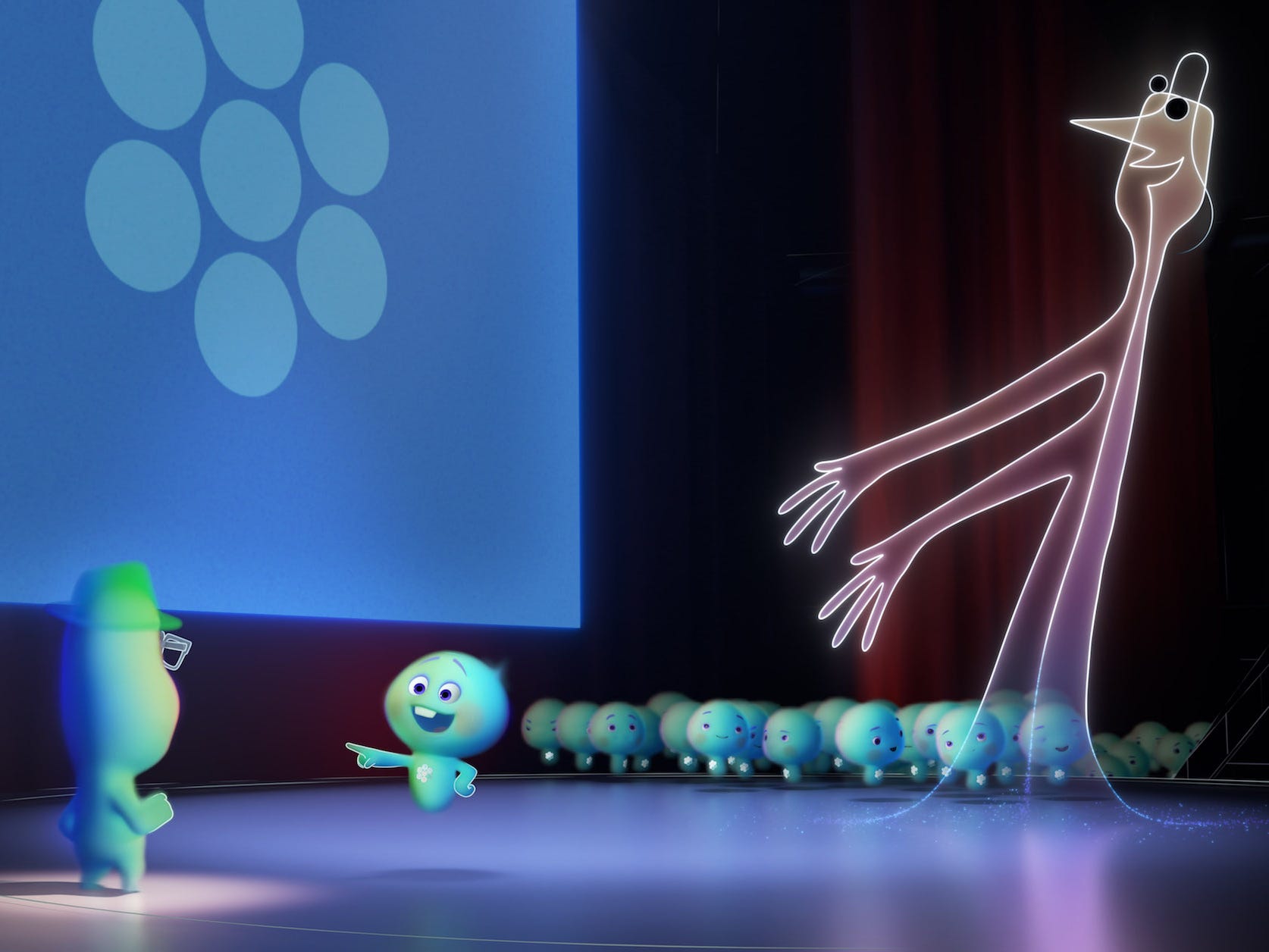 When the opportunity Joe has waited for all of his life falls into his lap however, Joe takes a fall of his own. Down a manhole to his untimely death. Shocked by his predicament and refusing to accept the end when he feels life is only just beginning, Joe finds himself navigating The Great Before, an abstract world of fledgling souls preparing to discover their ‘spark’ and head to Earth, all in the cause of avoiding a one-way trip to The Great Beyond, which is what awaits all souls after life. As Joe encounters the oddball visual representations of life’s foundational elements and elemental gatekeepers, such as a Kiwi soul counter with a superiority complex called Terry and the soul-educating symbiosis of Richard Ayoade and Alice Braga that is Counsellor Jerry, Soul’s grander designs begin to unfurl.

Such is the tonal shift and narrative diversion of the film from its quote-unquote ‘basic’ premise that, whilst it always sounds like a cop-out to say it, the less said about the story from there on in the better. Suffice it to say, the arrival of an unwilling unborn soul, 22 (played quite beautifully by the wonderful Tina Fey), and the relationship they and Joe are thrown into with one another as one seeks to reclaim their life and the other seeks to finally discover a tangible reason for a life at all, leads into a diegesis on the meaning of life from a molecular to a metaphysical level that is in equal measures profound, moving, awe-inspiring, and almost indescribably uplifting.

I’m not a religious man, though 2020 had oftentimes left me wishing I had some greater power to believe in, but the experience of watching Soul unfold feels epiphanic and completely transcendent. At times it is the stunningly life-like New York City, brought into sharp focus in a way that only the most personal and reverential memories of the Big Apple could visualise it, that overwhelms most. Sometimes it’s the Dali-esque, Escherian surrealism and impossibility of The Great Before, The Great Beyond, and The Zone (a realm in which Bob Dylan’s Subterranean Homesick Blues helps steer a tie-dyed ship that bridges the physical and spiritual world). Oftentimes it is the cantankerous, enchanting, clearly improvisation-led score from Trent Reznor and Atticus Ross that sends goosebumps rippling down your arms and calls the hairs on the back of your neck to attention. Almost constantly though it is the quiet wonderment at the very fact of our existence at all, and the subtlety and sophistication with which Docter and Kemp evoke and explain it, which rendered this anxiety-addled twenty-something fool spellbound. 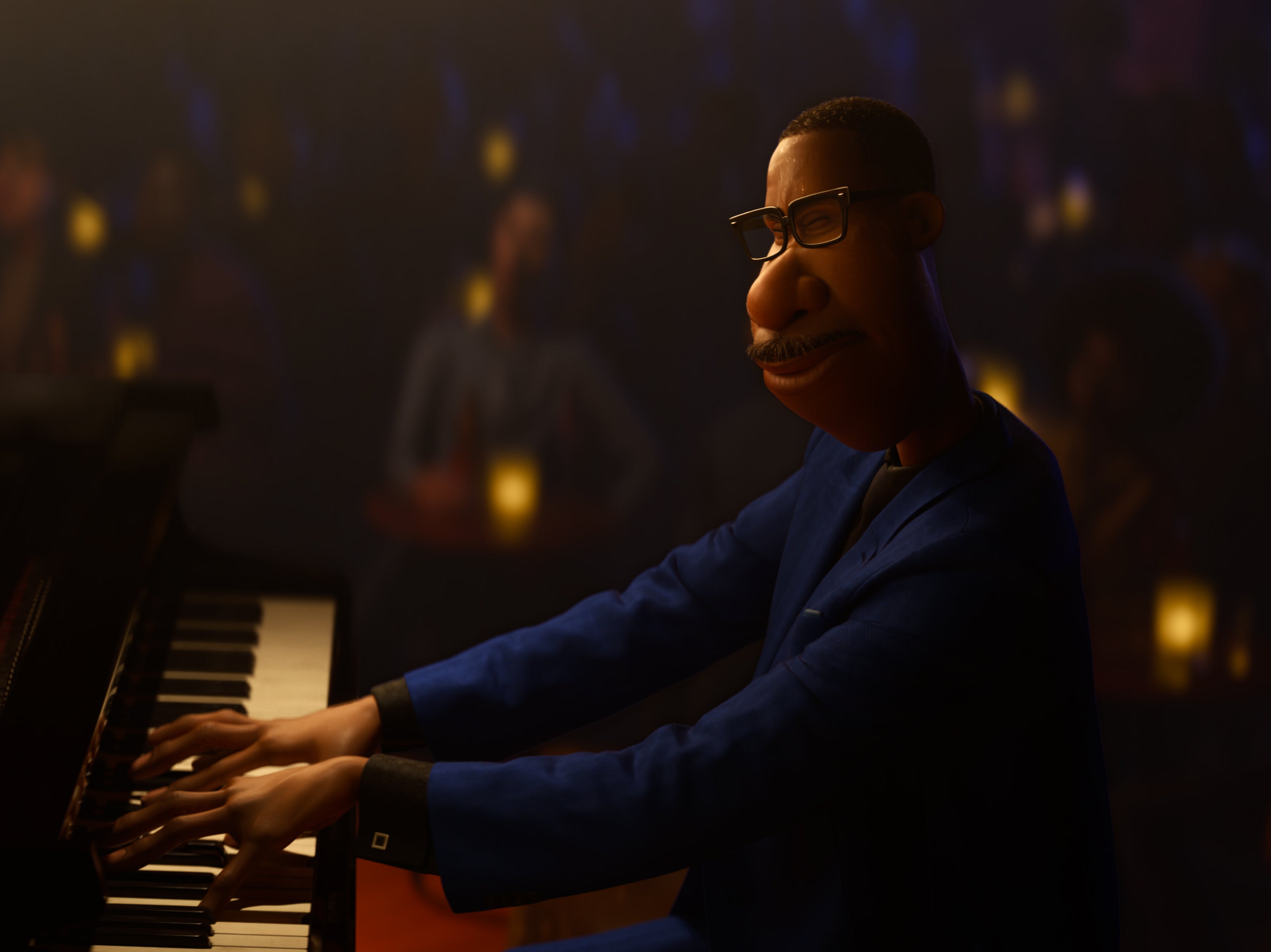 There is a sequence of shots at one point in the film that moved me to tears before the weight of what I was seeing even hit me. With a Malickian sense of nature and spatial (as well as spacial) purpose and wonder, we in sequence are shown Joe sat at his piano playing to himself, then his silhouette through the curtains of his bedroom window, then the block on which he lives, then Central Park lit up at night from a God’s eye view, then the Earth in satellite, before resting on a mind-blowing image of the Milky Way, our home in the universe’s unfathomable expanse. There is something in the recognition of both our infinitesimally small selves in relation to the universe, as well as the miraculousness of our spontaneously brought about existence within that universe, that could for a moment make even the most ardent atheist believe in a Divine creator.

The likelihood of my being here, of these millions of atoms being bound together and functioning as one for long enough to give me the consciousness to observe and experience and appreciate the products of the consciousnesses of billions more atoms that came together in the right place at the right time, is remarkably slim. And yet I am here. And you are here. And we are here. We spend a great amount of our lives waiting for a revelation to come around, for an opportunity to arise to do what we are “meant to do”. We yearn for that elusive ‘spark’ that people speak of and we crave an ever-shifting, ever-distancing moment of satisfaction with ourselves and our life that will somehow let us know that we have justified and validated our existence. In reality though, the revelation, the opportunity, the ‘spark’, the satisfaction, the justification, and the validation are all right here.

By taking us to the farthest reaches of existential contemplation and then bringing us home to the possibilities that lay beyond our own front doorstep each and every day, Soul challenges us not so much to question our reason for living or to contemplate how we become who we are, but rather to embrace the simple act of living whole and full heartedly every minute we are given on this often challenging but perpetually beautiful adventure we call life.

Like jazz itself, around which the film’s ebb and flow is so clearly defined, life is not some planned performance with high notes to hit and a chorus waiting to carry us home. No, life is an improvisation, a great celebration of diversity bred through adversity. We feel life most keenly when we let ourselves freely explore its every groove and rhythm, when we collaborate and listen and rejoice in the unique experience of being together with those around us and being comfortable in our own skin.

Soul is available on Disney+