As COVID-19 took hold of the world, it has been interesting watching how the film industry has responded.

With cinemas shutting, the release schedule thrown out of the window and productions delayed, there has been much conversation about what the future holds for the industry.

What has been most fascinating to see though is how filmmakers themselves have creatively reacted to the pandemic, both in the stories they are telling but the way they make them too.

Innovation and inventiveness has really shone through, as seen with the likes of Rob Savage’s Zoom horror Host and Doug Liman’s rom-com heist Locked Down which is set during the current pandemic. And whilst writer and director Sam Levinson’s latest film Malcolm & Marie isn’t about the pandemic itself, in many ways it reflects some of the intense emotions we have felt as we have been shut indoors.

A sense of isolation, claustrophobia and being trapped has been widely dominant, and this is something felt in Levinson’s sensational and intimate chamber piece. Shot during lockdown with a minimal crew, Malcolm & Marie follows the titular duo as they return home from a movie premiere.

As filmmaker Malcolm (John David Washington) dances around the room celebrating a successful evening, it is clear from the quiet way his girlfriend Marie (Zendaya) is making mac and cheese that something is brewing. It’s soon revealed that Malcolm forgot to thank Marie in his speech, but that’s only the start of the arguments which continue to spiral into the night. 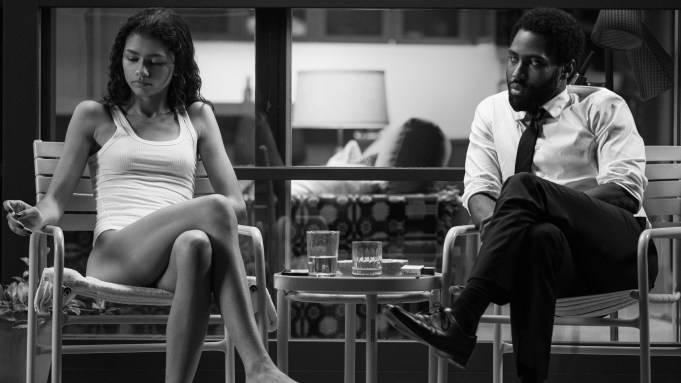 In other hands Malcolm & Marie could have been rather dull – a 106 minute film set in one location solely featuring two characters bickering is incredibly hard to pull off. But Levinson and co. pull it off and then some, with the result being endlessly compelling with individual flair that marks it out as something rather special. Instead of letting filming restrictions limit him, Levinson uses them to his advantage to make sure his movie packs a punch.

Never leaving the couple’s gorgeous home, we are confined within that singular location, unable to escape the fierce drama much like the characters themselves. That only intensifies every single emotion felt during the runtime making the whole experience exhausting, but in a rewarding way.

As Malcolm and Marie tirelessly try to break each other with words, dedicated to one-upping the other, much is unpacked here as the good, the bad and the sheer ugly of both their relationship and characters are explored. While there are brief moments of levity and relief, which are much needed amidst the turbulence, they are short lived as the pair are unwilling to let go.

With Levinson ensuring the rhythm of the arguments is spot on, as one ends we almost can’t wait to see what will cause the couple to explode next, almost in an addictive way with the intimate camera angles only emphasising this voyeurism. It helps that the topics explored during the couple’s conflict are rather fascinating as Levinson analyses artistic collaboration, identity politics, the entertainment industry and film criticism through astonishing monologues which gives the actors plenty to chew on.

Although these dialogue heavy debates certainly won’t be everyone’s cup of tea, the way they are boldly delivered with a spoonful of both humour and truthfulness ensures that it works and never feels too self-indulgent.

Of course it also works tremendously thanks to the sheer magnetism of both Zendaya and Washington, as you will be unable to take your eyes off them as they dance this sexy and volatile tango. Washington fully embraces Malcolm’s self-obsession, ego and the passion that drives him, making his animated rant about critics amusing and fun rather than frustrating. As Marie calls out Malcolm for his hypocrisy and self-importance, we are reminded not to take him seriously at all. At the end of the day, this is one man on a mission to fight with himself. The charisma we have seen ooze out of Washington so easily before in the likes of Tenet also is very much present here, so whilst Malcolm is an asshole we can’t help but be drawn to him.

Indeed Washington is fantastic, but there is no taking away from the fact this is Zendaya’s show as she delivers the finest performance of her career so far. Raw, furious and bemused, throughout the tight runtime Marie feels every emotion under the sun, and this allows Zendaya to really fly, capturing every single one of them perfectly.

Just when you have already been blown away by her phenomenal performance, Levinson gives Marie a powerful monologue Zendaya runs away with, which leaves both Malcolm and us utterly speechless.

These outstanding performances only makes Malcolm & Marie even more absorbing, as does the luscious black-and-white cinematography which is a gorgeous sight to behold and makes the movie even more rich.

Whilst the ferocity of the experience will leave you needing to take a breather once the credits have started rolling, the enthralling nature of Malcolm & Marie will likely also leave you addicted, wanting a rewatch to feel it all again. Take a bow!

Malcolm & Marie is out on Netflix on 5th February