When Cathy agrees to babysit her stand-offish sister Gail’s (Catherine Curtin) tabby cat for six weeks, she finds herself with an excuse to get away from her quietly hostile homestead – she has a low-level constant disaffection towards her husband and a seeming inability to connect in any meaningful way with her daughter – and experience a change of scenery and surrounding for a little while. Whilst there’s no love lost between Cathy and her sister’s cat, who claws her at the first opportunity, leaving a telling septic mark that betrays her otherwise perfectly clear skin (Foreshadowing 101), Cathy proves pretty popular with the neighbours.

Finding friendship in the form of Gail’s free-spirited trainwreck neighbour Gemma Jean (a captivating Christine Woods), her meek-creep husband Paul (an asinine Graham Sibley), and their meek-creep son Xander (an implacable, unnerving Max Burkholder), Cathy quickly finds herself spiralling into vices hitherto unconscionable to the otherwise-model mother. Taking up smoking and pill-popping at Gemma Jean’s persuasive behest, landing herself a dead cat to bury, and playing bunny boiler to her new friend’s husband and would-be Mrs Robinson to their son, as Cathy’s newfound decadent lifestyle threatens to totally undo her outward image of composed infallibility, Eisenstadt slides the dial in this dark comedy further and further from laughs and closer and closer towards uncomfortability and confusion. 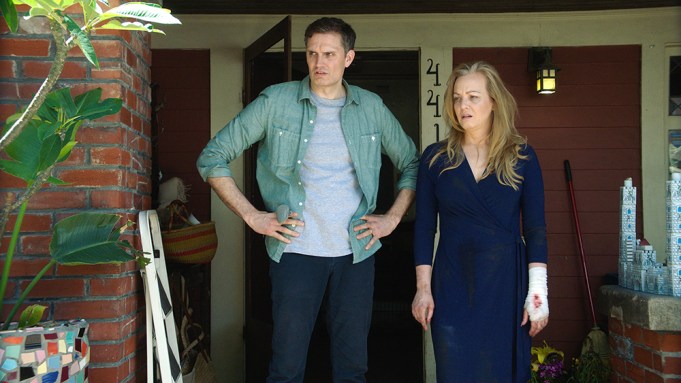 McLendon-Covey is a fantastic holding centre in a performance that takes the exquisite timing necessitated by her time as a regular on The Goldbergs and in films such as Bridesmaids and lenses that skill anew under a dramatic framework rather than a purely comedic one. Unfortunately however, a strong lead isn’t enough to prop up a poor plot and some thoroughly bizarre supporting performances. As Eisenstadt’s script time and again fails to hold onto an idea for any longer than it takes to form it (is this a critique of domestic life or a defence? Are we to sympathise with any of these characters or deplore them? Is Cathy written to be an apathetic figure or is there simply a lack of empathy in her composition?) her characters float purposelessly through the film’s formless structure, accidentally divining moments of drama and comedy rather than carefully constructing them. A truly unfathomable Mel Elias piano-led score does little to untangle the plot’s spurious narrative threads either.

Whilst Eisenstadt may well have learned a thing or two about the dramatic and writing process from stage and screen mentor David Mamet, who she most memorably collaborated with on the stage and screen versions of Oleanna – a story to which this film owes more than a little thanks – what she gives her film in ambiguity she leaves it suffering for in terms of any sense of what the purpose of it all has been.

Blush is a messy, messy film, and the longer it goes on the less sense any of it seems to make. That being said, Wendi McLendon-Covey is truly wonderful with the material and elevates the quality of the entire production with her presence and professionalism. Blush is a curio, but we all know what curiosity did to the cat.

Blush is out on Digital now.