‘River Deep, Mountain High’, ‘Proud Mary’, ‘What’s Love Got to Do with It?’, ‘The Best’, and the list goes on. With her lion-like mane and roaring rocky vocals, Tina Turner has been an apex predator of the music industry for six decades now, slaying fans with her untamable energy and zest for life, killing it in the charts around the world, and selling out stadium tours like it’s nobody’s business. But for a lady so beloved by so many and gifted with one of the most iconic voices and looks in music, Tina Turner has known more suffering than many could ever imagine. With the release of Dan Lindsay and T.J. Martin’s TINA, of which her husband Erwin Bach says ‘this documentary is it – a closure’ to a remarkable career and life, we are invited behind the veil to meet Tina Turner through her groundbreaking best and Earth-shattering worst times.

Lindsay and Martin’s doc begins with Turner’s now-infamous People Magazine profile in 1981, in which she spoke out about her years of abuse at the hands of ex-husband and rock pioneer Ike Turner. As the writer of the piece Carl Arrington explains, ‘In the early 80s, People magazine was the equivalent of going viral,’ and so as Turner opened up about the ‘torture’ she experienced at the hands of Ike – ‘I didn’t exist’ she recalls – her story resonated around the world. On the one hand, Turner’s frankness and honesty inspired thousands of women to adopt an ‘if Tina can do it, I can do it’ mentality in escaping their own domestic hells, and on the other hand, the profile gave the media a go-to line of questioning that has hounded the star throughout her career and hampered her ability to let her music do the talking. As the documentary circles round to Tina’s trauma time and again over its duration, hearing her son recount the time his mother was strangled and burned by Ike is heartbreaking, and watching montage footage of interviewers repeatedly hammering Turner with questions about her marriage as books and films are released to exorcise those demons for her is a pertinent reminder of the vampiric nature of the media at large. When we eventually arrive at the point where Turner recounts the day she massaged her ex-husband into sleep, took her little luggage bag, and left Ike Turner for good, you can’t help but be relieved, both for the fact that she escaped and for the fact that the documentary can begin to leave that chapter in Turner’s life behind for a little while. 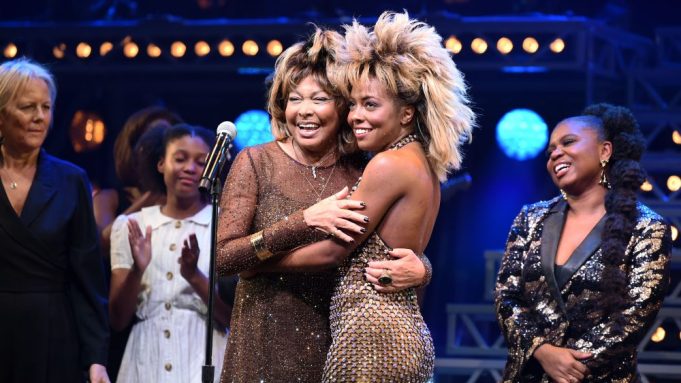 Tina does dwell often on the difficult childhood and first marriage that moulded Turner into the courageous survivor we see her as today, oscillating through Tina and Ike’s tempestuous romance and addressing the star’s abandonment by her parents at a young age, but that isn’t to say this is a doc that deals exclusively in trauma. Tina Turner’s music and on-stage energy electrifies throughout, reminding us of why we have all fallen under her spell. In static shots from Turner’s early career, where her shimmying and thrusting defied the formal presentation of more prim and proper musical outfits like The Temptations, it’s like catching lightning in a bottle. In live performance footage from across Turner’s career, we are given a potent reminder of this woman’s extraordinary voice. Early in the film, numbers like ‘River Deep, Mountain High’ and ‘Proud Mary’ showcase Turner’s upbringing on Black Gospel and Blues music – ‘B.B. King was our radio’ she reminisces. Even for the staunchest of atheists, hearing her build to that great thunderous release on Proud Mary makes a strong case for conversion. As the film, which is segmented tidily into four parts, comes to Turner’s birth (‘It wasn’t a rebirth, she hadn’t even been made yet’ one of the film’s many talking heads quips) as a solo star in the 80s, tracks like ‘What’s Love Got to Do with It?’, which was a flat pop bop before Turner took it to church, showcase the singer’s indelible range.

The highlight for many though will be Turner’s live performance of The Beatles’ ‘Help’, which is not only one of the greatest cover versions of all time, but also represents in the film’s penultimate chapter a point where the lines between artist and art truly dissolve. With the recollections of a lifetime of abuse still at the forefront of our – and necessarily Tina’s – minds, and the knowledge of Turner’s global adulation, her slow and impassioned cry of ‘Won’t you please, please help me’ reaches deeper than lyricism and towards a revelation for the singer that she has been strong for too long on her own and there are legions out there who have her back. By the time we meet her husband Erwin in the film’s final act, as Tina recalls with schoolgirl giddiness the foundations of their love affair, a point of serenity and solace seems to have been reached for a woman with the world at her feet and the weight of it on her shoulders. As she maneouvres her ex-husband’s death with tact and humility and prepares for the premiere of the smash-hit musical story of her life, we are left on a note of acceptance on Tina’s part.

‘Forgiving means not to hold on’ Turner posits at the film’s conclusion, echoing her husband’s sentiments surrounding Tina’s status as a closure on a remarkable career and an acknowledgment of a curtain call drawing closer on one hell of a life. Through a careful and considered documentarian approach, collating over half a century of materials and anecdotes into a perfectly timed and measured package, directors Dan Lindsay and T.J. Martin have more than done their subject justice.  And, as Turner’s greatest song plays out, one which has recently been reclaimed as the ultimate love song by Schitt’s Creek, we are left in no doubt that as far as the many tellings of Tina Turner’s story goes, this one is simply the best.

Tina is playing as part of the Berlinale Film Festival