There was a strong urge to open this review with a personal revelation. An all-too familiar scene hit me in the gut and the heart. Feelings of rage and sadness gripped my gut as those memories filtered in. The moment felt all too real for me.

Then another moment happened, and another, and another, until I was consumed by tears, clutching onto my cushion with a riptide of emotions smashing into me.

I can only imagine that I wouldn’t be the only woman or girl to feel this way after watching Amy Poehler’s Moxie.

Adapted by Jennifer Matieu’s novel, the film revolves around introverted Vivian who, alongside her female classmates, are constantly ranked and harassed by the male population. When new girl Lucy arrives, she upsets the student body by openly arguing against main perpetrator and popular jock Mitchell. Inspired by Lucy’s stance and equally fed up with the boys, Vivian starts the titular zine which turns into a movement, ready to take on the patriarchy.

Leading the charge in this fun and vivacious film is a group of young and strong performers who inhibit each different role and voice within these characters. Hadley Robinson as the brooding Vivian, Alycia Pascual-Pena as the vocal Lucy, Lauren Tsai as cautious Claudia   With Amy Poehler overseeing the cast as director and writer as well as Vivian’s mother who inspiring mother with her own history of rebellious behaviour. 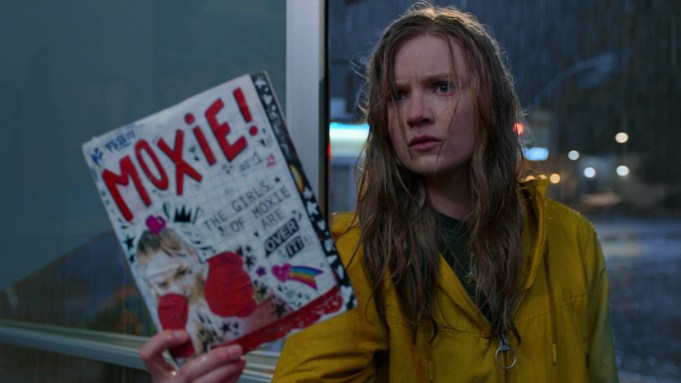 There is an urge to bill this movie as a comedy, owing to Poehler’s clear history in the genre. In fact, early reviews have already compared Moxie to Lady Bird and Booksmart as contemporaries. However, this young adult adaptation feels more akin to The Hate U Give or even Love, Simon in terms of how it positions young people as the life-force of protest and change. Moxie deals with difficult subject such as bullying, sexual harassment, sexism, and rape. To place all it’s worth in weather or not it can make you laugh feels disingenuous. Especially because, when it wants to, it can be very funny.

The film dares to be hopeful in a world that feels ready to sink into cynicism. Yet it never careens into this over-sentimentality feeling. In fact, it is whip-smart by willing to criticise its main characters and show how movements can make mistakes. Moxie takes time to analyse the rage which doesn’t dull the passion. If anything, it fuels the fire and allows our characters to learn as they riot, revolt, and reprimand.

Though it doesn’t dive as deep as it should, Moxie is nuanced enough to showcase different sides of change and how you don’t have to have loud voices in order to make a change. By including intersectionality and having Vivian constantly re-evaluating herself, those around her, and the consequences of her actions, it allows an audience to reassess their own behaviours. It even includes some male voice, with their different levels of support, especially with Vivian’s beau Seth. Whilst these moments can cause the movie to lose a part of it’s momentum, it still showcases that teenage life doesn’t have to solely focus on fighting back.

“If only this movie was around when we were young,” I can hear people say, after the credits have rolled. Whilst that rings true for many battered by teen movies telling us to be pretty or get the guy, it’s a phrase that mustn’t be used to dismiss the aim of the movie. This isn’t just for the next group of upcoming rebel girls: Moxie is an anthem for all of us, appealing to the girl inside of us who wants to make change.

The youth may be the spark but it is up to us to turn it into fire. We’ve all got to show a little moxie…

Moxie is out on Netflix now!

One thought on “Moxie – Review”