In the pandemic age, the rules for releasing movies have been turned upside down. While sending films straight to streaming has traditionally been the sign of a studio “dumping” a movie, now it’s where they’re putting their prize projects – there’s a reason Disney gave Soul a streaming life raft, while leaving The New Mutants out to sea. Coming 2 America is a new kind of studio dump; even with Paramount launching their own streaming service, they still sold the rights to Amazon, the belated sequel debuting on Prime worldwide the exact same week Paramount Plus launches in the US. That a high profile sequel to one of the most beloved comedies of the 80’s, the ideal project with which to capture the interest of potential subscribers, was shifted elsewhere primes the audience for a disaster that doesn’t materialise – this is a much less interesting type of bad film.

If anything, audiences will be surprised that such an empty, algorithmically minded sequel was ever headed for cinemas at all, copy-pasting the narrative formula and finding ways of shoe horning in minor characters from the original with no clear storytelling logic, not wanting the audience to laugh so much as to nod in recognition at familiar faces. It’s an entirely lifeless experience, and one that only reinforces why John Landis’ original film has stood the test of time better than anybody could have imagined. Much like Groundhog Day, it was one of the rare comedy films of its time to not lean too hard into era specific jokes that would make it age like milk, and it still holds up as much more than a nostalgia piece today. Director Craig Brewer doesn’t seem to understand this, with a barrage of late 80’s/early 90’s pop culture gags and cameos that highlight that this exists as a nostalgic throwback first, and a coherent comedy sequel a distant second.

Prince Akeem (Eddie Murphy) is back living in Zamunda with his wife Lisa (Shari Headley), where he lives happily with his three daughters. But with his father (James Earl Jones) on his deathbed, and only a male line of succession approved in the country’s law, there is worry about who will succeed Akeem – but luckily, they discover he has a long lost 30 year old son back over in New York, from a one night stand he conveniently doesn’t remember, that was not even alluded to in the first film. So, with servant Semmi (Arsenio Hall), he heads back to America to find his son and prepare him for the royal lifestyle. 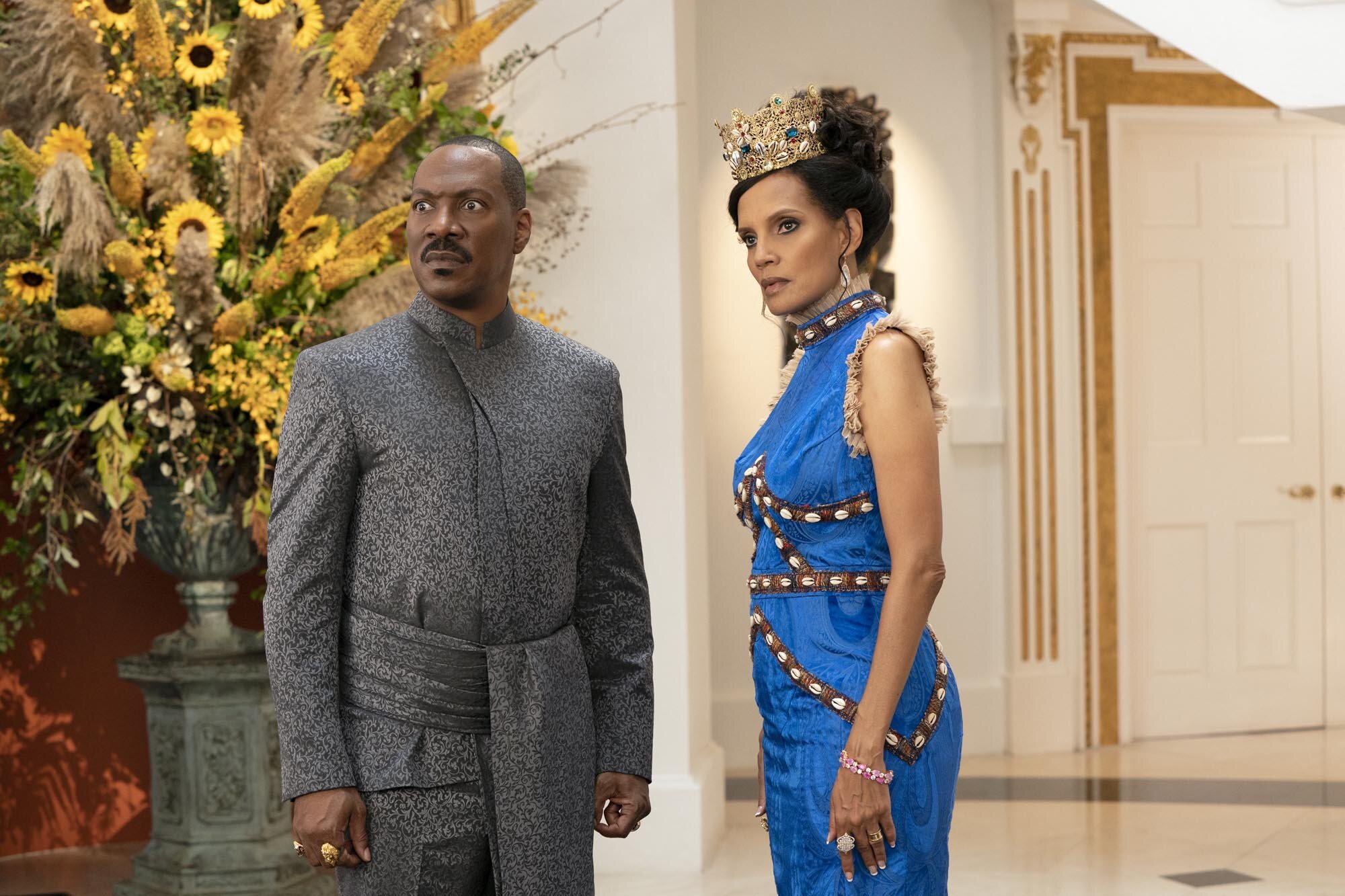 The original film is notable for being the first Eddie Murphy big screen outing in which he donned prosthetics to inhabit multiple larger than life characters. Because of this, it often gets lost in the discussion that his leading performance as Prince Akeem was one of his most uncharacteristically restrained, with Murphy delivering one of his rare “everyman” performances – all the more commendable considering the character’s lifetime of wealth and privilege. Here, Akeem is the only character who seems to have experienced any growth or life changes in the 30 plus years since we last saw him, with the ensemble around him all falling into the same trap as every belated comedy sequel. For the jokes to still land, we have to believe everybody is in the same place in their life as when we last saw them. The old men are still at the barbershop arguing about fighters (Muhammad Ali replaced by Conor McGregor as their topic of discussion), Akeem’s arranged wife from the original is still barking after he forgot to stop commanding her to, and most bafflingly of all, Louie Anderson’s fast food restaurant worker is still working at McDowell’s, despite it having relocated from Queens to another continent entirely.

The original film’s screenwriters, Barry W. Blaustein and David Sheffield, have returned to write what effectively amounts to a victory lap, nodding to the original’s many funny moments without ever expanding upon them, or repeating what made them funny in the first place. They’re joined by Kenya Barris, who seems keenly aware that he’s writing a sequel of diminishing returns; one odd scene features two characters discussing what makes a good sequel, with the Barbershop franchise being singled out as one of the better examples. You needn’t head over to IMDb to clarify that Barris’ first screenplay credit was for the most recent Barbershop outing. This is one of several jarring pop culture references that signal the film is aiming for nostalgia, rather than another fish out of water comedy with cross generational appeal. Why else would En Vogue and Salt N Peppa have extended musical cameos, if not to take the audience back to the early 90’s? It certainly doesn’t move the plot along.

This all leaves Coming 2 America in the unusual position of feeling less of the moment than the film that preceded it decades prior. In some cases, it falls into clumsy outdated African stereotypes more than its predecessor, with gags about child soldiers and ritual circumcision sitting awkwardly next to the first film’s fantastical, but never mean spirited, depiction of royal opulence. The first film mostly swerved past easy gags that would belittle the culture – in its mad scramble for anything approaching a joke that isn’t a carbon copy of the original, Coming 2 America frequently takes the low road.

Coming 2 America is a joyless experience. If you’re feeling nostalgia for the original, give it a rewatch, and let this unnecessary sequel get lost to the streaming algorithm.

Coming 2 America is out on Amazon Prime now.