Dash Shaw’s hand-drawn adult animation Cryptozoo begins with a hippie couple (played memorably if briefly by Michael Cera and Louisa Krause) having sex in a forest. As Cera’s Matthew compliments his belle’s body from top to toe, the animation demonstrates an abstract approach to form that can best be described as a chimera of pioneer Winsor McCay, oddball auteur Karel Zeman, the beloved PlayStation classic Katamari Damacy, and those scratch-foil paintings you used to get as a kid from your local arts and crafts shop. If that sounds a little nuts, then you ain’t seen nothing yet.

When Matthew has finished frolicking and fornicating with his lady friend, he discovers a high fence, on the other side of which is the titular Cryptozoo, the residual home/velvet prison of many marginalised cryptid folk (fauns, gorgons, unicorns, maybe even a dream-taking water-cloud-elephant if Lake Bell’s keen cryptozoologist Lauren Grey has any luck). ‘It’s like Disney World,’ Cera’s Matthew gawps. ‘What if we shouldn’t go there?’ Amber questions. ‘Natural stuff can’t hurt you too bad,’ Matthew counters. ‘Utopias never work out,’ Amber ripostes melancholically. The couple clamber over the fence nevertheless, where they meet a beautifully drawn unicorn with a translucent horn. When Matthew approaches it, he promptly gets gored to death, which in turn leads to Amber retaliating and beating the unicorn to death with a rock. Turns out natural stuff can hurt you pretty bad, and utopias don’t always work out. Why though? Well if this very blunt imagery of man interfering with the natural order of things doesn’t make the villains of the piece obvious enough (it’s us, guys), then the adventure that Matthew and Amber’s entr’acte serves as a prelude to makes it pretty clear. 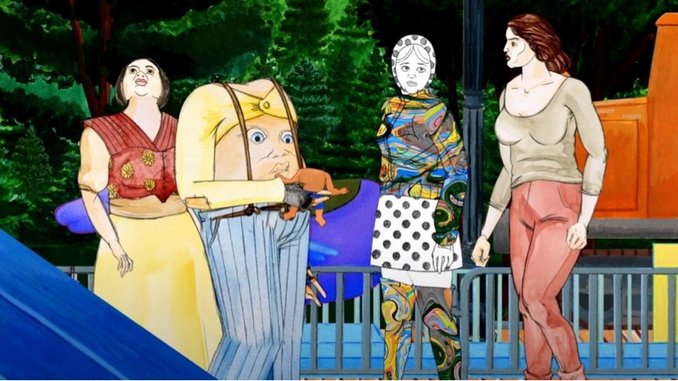 Lauren Grey is the Lara Croft of our tale. Intrepid adventurer, face like a Rossetti painting, and a drive for discovery, Grey has worked under Cryptozoo founder Joan (Grace Zabriskie) for a long time, naively hoping that she’s helping to make a better world as her boss sits pretty in her veritable ivory tower. In Lauren Grey’s eyes, Cryptozoo is ‘more of a sanctuary than a zoo’, but in the eyes of the more skeptical human-passing resident cryptid – gorgon Phoebe (Angeliki Papoulia) – the place ‘looks like a shopping mall’. The idea that the nobly founded desire to help cryptids necessitates a capitalist framework to be viable is a clear analogue for the way in which marginalised communities in reality are often subjugated and forced to appear grateful for merely being given a place in a system that quietly continues their oppression.

A strong anti-capitalistic and anti-military sentiment runs powerfully through a film that makes up for a lack of fluidity narratively with thunderous crashes of thematic intensity. The more specific bad guys in this story are the US Military, who are trying to capture cryptids for potential use as bio-weapons. Poacher and ex-military man Nicholas (Thomas Jay Ryan), alongside faun Gustav (Peter Stormare), tail Lauren and Phoebe as they seek to return the dream-catching Baku. Nicholas envisions a world in which the Baku can kill the rise of the present or any future counterculture, whilst for Lauren her association with the Japanese legend is more personal – in her military camp upbringing the Baku represented peace from the violence around her. Needless to say, the clash between an iffy if earnest ideal – the Cryptozoo – and the militarised pursuit of mass destruction paves the way for a piece that meditates on many social justice issues without adequately coming up for an answer to them. ‘I should have left the unicorn alone’ is just about as committal as Shaw gets in terms of synthesising a conclusion to his diegesis on humanity’s right to interfere with nature.

With a spry voice cast, a plethora of fantastical creatures drawn straight from international mythology, and an animation style that is ceaselessly awe-inspiring, even if Dash Shaw’s Cryptozoo is a little more style than substance, credit where credit is due the director makes a good fist of starting an important conversation. Like an ethically aware alternate reality Pokémon or an inverse Jurassic Park, Cryptozoo leaves us to ponder whether we have any right meddling in the lives of others without their say-so, and just because we could, maybe we should stop and ask ourselves whether we should.