The pen is mightier than the sword, or so the saying goes, but sometimes you just can’t beat sticking a troll with the pointy end. This is the basic idea behind Dutch director Ivo Van Aart and writer Daan Windhorst’s The Columnist, a darker than dark satire that radically imagines a scenario where a liberal journalist takes bloody revenge on the incels, trolls, and cyberbullies who stalk internet forums and Twitter to make her life hell. The result may be lacking any concrete answers to the questions it poses around free speech, accountability, and social media’s vice-like grip on society, but – speaking as a film critic who has been on the tail end of more than my fair share of online abuse – what Van Aart’s film lacks in depth, it more than makes up for in stylised silliness and troll-thwacking thrills.

Katja Herbers stars as Femke Boot, a liberal journalist at a Dutch newspaper who finds herself subject to death threats and obscene, sexist comments online when she pens a column suggesting blackface donning Dutch folkloric figure Zwarte Piet should be cancelled. Struggling with writer’s block as her boss pushes her to pen more pieces that will ‘cause a stir’ and help the rag compete with the grim writings of horror author Steven Dood (Bram van der Kelen), who Femke finds herself embarking on a romantic affair with after realising the Goth harbinger of death persona is all an act, the frustrated journalist is increasingly driven to distraction by the dings and screen-flashes of Twitter beckoning her to read the latest comment labelling her a cunt and a paedophile. Van Aart’s film makes a clear point of showing how Femke contributes to her own misery by entertaining the trolls through interaction with their slanderous comments, but even as her new boyfriend and her daughter – who is fighting a battle of her own against her archaic headteacher – repeatedly tell her to switch off, we see her time and again fail to resist scratching that particularly painful itch. Is ignoring the haters the answer? Sure, it would stop those on the receiving end having to see the abusive comments. But even if a tree falls in a forest and nobody is around to hear it, if someone has cut it down out of malice and spite, they should be held to account, no? 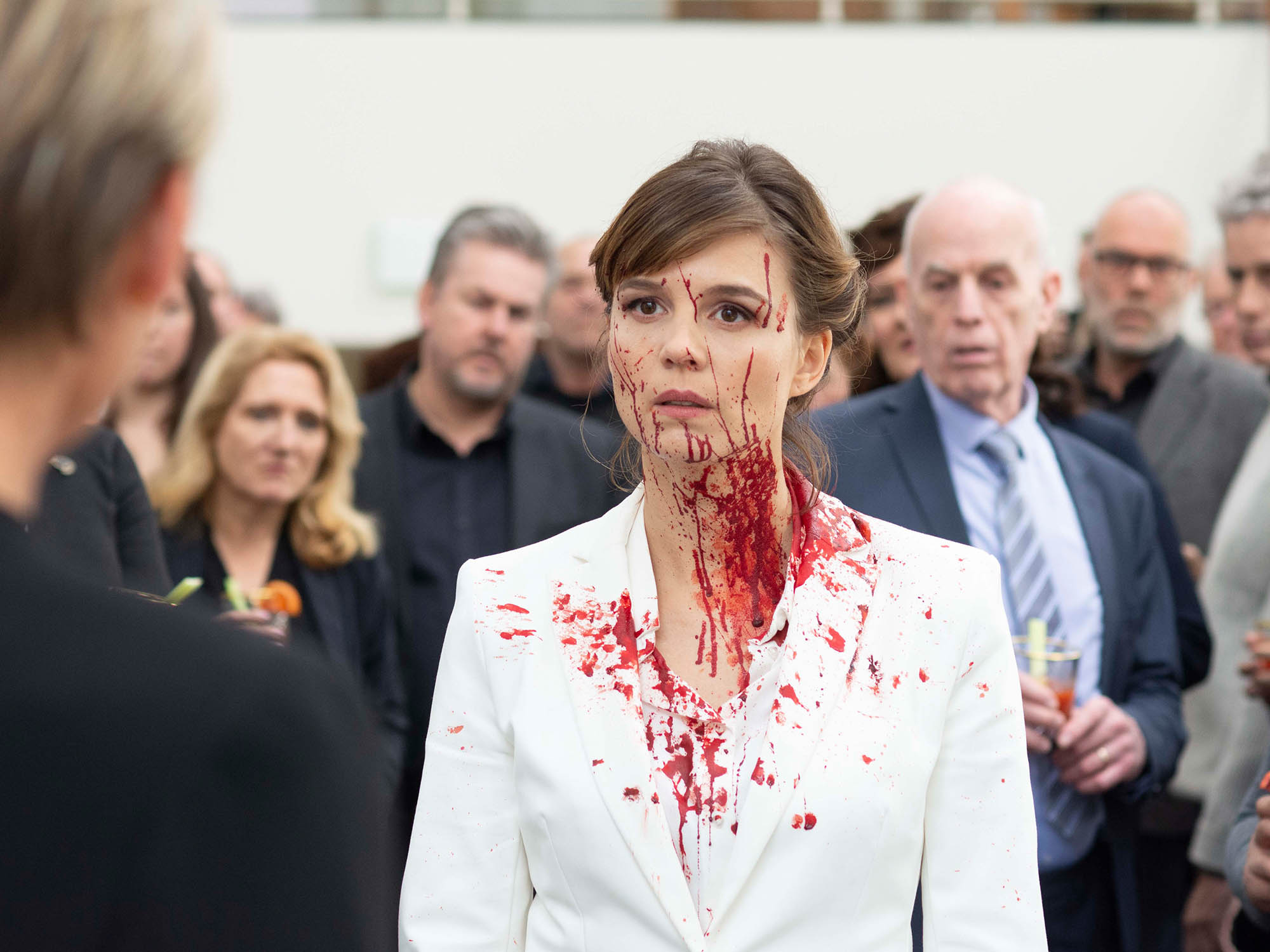 When Femke realises one of her aggressors is her noisy next-door neighbour, a moment of madness prompts her to climb out of her writing room window, tiptoe along her guttering, and push the unsuspecting knuckle-dragger to his death. Van Aart presents Femke’s first killing, and the many that follow as she becomes perpetrator of ‘The Middle Finger Murders’, in a blunt, detached fashion that adds to the oddball humour of proceedings. There is such a matter-of-factness in Herbers’ acting as she pushes him, spots a shovel, and promptly hacks off his once-weaponised middle digit, that there’s an almost Yorgos Lanthimos reminiscent surrealism to the deed. As Femke then proceeds to stalk more of her tormentors, bumping them off in myriad bloody ways as she crusades against being silenced by permanently silencing her critics, her detachment from reality and any sense of consequence mirrors the stylistic sensibilities of the filmmaker. The extremity of Femke’s revenge is presented, in a very tongue-in-cheek manner, as the apotheosis of right-wing trolls’ greatest fear – that liberal progressivism is a direct attempt to destroy their lives. It is also though a pointed jab at the hypocrisy of advocating for free speech whilst actively trying to silence those whose opinions differ from our own. Van Aart is having far too much fun with silly murders and blunt metaphors to really pick apart the nuances of the points he so broadly makes, but he does make them nevertheless.

Whilst The Columnist fails to develop effectively its array of observations about the state of today’s society, its portrayal of a wolf-in-sheep’s clothing (Femke), a sheep-in-wolf’s clothing (Steven), and the great swathes of would-be anonymous trolls who say online things they’d never dream of in person as they lead otherwise outwardly ordinary lives does add up to something resembling a moral message on judging books by their covers. People say hateful things without being hateful people, and people also preach liberal values whilst indulging in deeply antithetical, illiberal behaviour. Though Daan Windhorst’s screenplay broaches these ideas in the very broadest of strokes, dedicating more focus on delivering nifty witticisms and cult-status beckoning one liners such as ‘you called the wrong fucking whore a fucking whore’, their presence is a conversation starter nevertheless.

Buoyed by a brilliantly psychotic central performance from Katja Herbers, a manic energy that keeps you guessing right up until the film’s Black Mirror like finale, and a jumping off point that captures in exaggerated machinations our current moment as Schumacher’s Falling Down did some thirty-odd years ago, The Columnist just about gets away with murder.

The Columnist is out on VOD now.