18 year olds behind the camera often produce contentious and weary products. We’re not saying that young rambunctious filmmakers can’t craft something good, but directing and script-writing often takes time, hard work, and a lengthy career before a movie resembling anything genius is made. Also, who gives an 18 year old the right to make a film better than anything you’ll ever see in cinemas? Yeah, you should be trying out a disastrous look and thinking you’re an adult with your alco-pops and Fresher’s Fairs.

Back in 1993, our now favourite British export (fight me,) was just a fresh-faced youngling who crafted this impressive short film with 70 mates and colleagues and an ambition to make some goddamn movies. 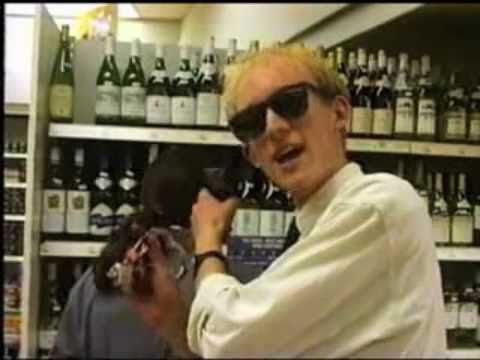 Dead Right is forty minutes of Southern English Village brilliance, stripping its parody straight from the chops of Clint Eastwood’s Dirty Harry. There’s a killer loose in a small Somerset village and Maverick DI Barry Stern and his straight-laced partner DI Mike tight have to pair up to find the murder before he kills again…

You can see the beginnings of Hot Fuzz in this 1993 short. An American style action film set in a sleepy British village makes it a hilarious and intelligent outing for a clear film nerd. The comedy short is filled with every comedy possible: Slapstick, Satire, and Fourth-Wall Breaking moments that embraces is utmost silliness and relishes in it.

The production values may be dated (it’s shot on SVHS people.) BUT, Wright showcases his smart camera movements, clever dialogue, and unstoppable jokes beat after beat. It’s everything you expect from Edgar Wright’s earlier days because it’s so sharp-witted and clearly a homage to films he adores. It comes through with his work and his friend’s performances.

Here’s where Dead Right becomes a gem. Because everyone here is having the best time and enjoying everything they are producing. It’s that young nature that is filled with determination and frivolity that makes the film such an enjoyable watch

Dead Right is an enjoyable romp that is, for a lack of a better phrase, fucking funny!