It has been over a decade since the zombie rom-com Shaun of the Dead hit our screens and changed the face of British comedy from sickly sweet romantic comedies to, well, movies that actually make us laugh. When its faithful companion Hot Fuzz came out, it solidified our trust in the Wright, Frost and Pegg partnership to bring quality movies. So a whole six years later, after the gang went off to complete separate projects, returning to finish off a delicious and creamy trilogy.

That was the wrong adjective…

Anyway, in 2013, they all came back to produce an alien invasion comedic epic aptly named The World’s End.

The film revolves around Gary (Simon Pegg), a wasted going on forty loser whose life hasn’t gone anywhere since he was a teenager. Stuck in a time of his life where he was happy, Gary is desperate to relive one of the best times of his life; completing an infamous pub crawl in Newton Haven that culminates in the final boozer, The World’s End. However, his friends, Andy (Nick Frost,) Steven (Paddy Considine,) Oliver (Martin Freeman) and Peter (Eddie Marsan) have all moved on. Reluctantly joining him on the quest, old scores and emotions will be settled. Soon they find that visiting the old town is strange, there is weirdness in the air and the locals are acting odd. Perhaps it’s because people have moved on and everyone but Gary has changed. Or perhaps it’s because an alien invasion has occurred. It is up to Gary and pals to save the day, save the world and save themselves.

The World’s End starts of very slow with a whole swathe of back story and character building. But that isn’t necessary a bad thing. Although it doesn’t hit fast and quick like Hot Fuzz did, it is more mature and grown up; laying foundations to rely on when the action hits. When the second act kicks in and the alien invasion starts to reveal itself, these layers of comedy come fighting back to punch you straight in the funny bone. It is a very sophisticated, well written comedy that keeps you laughing and just when you think you can laugh no more, it brings another round of hilarity. It is a smart and intelligent film that is unrelenting with the jokes. The climax of the film is simply a slice of fried gold that is sharp, slick, and surprising.

Yet it isn’t just the comedy or the big budget fight scenes that are impressive, underneath this all is humanity. There is heart that twists with the turns and surfaces with every new pub that the gang enter. Past differences and conflicts bubble up as they try to save their lives following the long tailed coat of Gary to the bitter end. This incredible pulse beats realism. Though that is partly to do with the genius writing, it is just as much to do with the acting talents of our crew. For years, Pegg and Frost have developed an on-screen comedy chemistry that is unlike any other and here, all those years pay off magnificently with just a little twist on their usual relationship. With Considine, Freeman and Marsan all supporting with great roles, the cast here are impeccable, never missing a beat. Actually, though, it is Pegg that really steals the whole movie. Not only did he ensure epic comedic timing and laughs, but he actually stirs some pretty deep emotional issues. 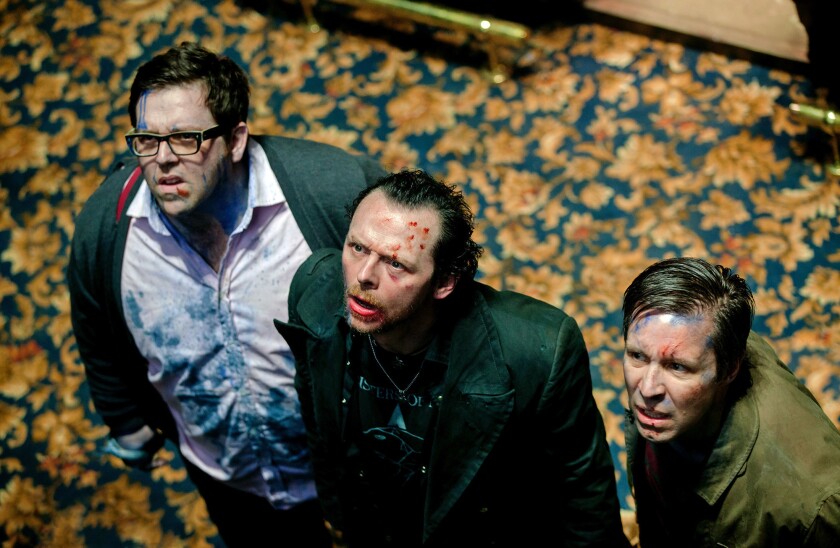 Look, Simon Pegg has already established himself as one of the countries best comedic actors but we need to recognise that his emotive acting is just as good, if not better. In The World’s End, as Gary, he packs an almighty punch that has enough clout to stick with you. When Gary has a complete breakdown, revealing that he tried to commit suicide and the real drive behind the haphazard pub crawl, it is commanding, heart-breaking, and utterly phenomenal. Pegg’s inner-working of his character’s are genius and it’s about time he gets given more merit for his performances, more so than his humour and his writing.

The World’s End is often placed on the bottom most rung when quantifying Wright’s filmography but, honestly,  it deserves a lot more praise than it gets. A fast paced ride that has all the sentiments of the old familiar, The World’s End is a perfect final piece to the Cornetto Trilogy.