Sometimes you come across a film that you know, objectively, is a bad or average film. You know in your mind that there are faults but your heart says otherwise. You are overcome with emotion as your pulse beats wildly against your more intellectual thoughts. Your mind is trying to be objective but your spirit says otherwise.

“Screw it”, you’ll scream loudly, “I goddamn love this film.. Yes, there are issues but I don’t really care. I am overcome with GLEE!”

The Greatest Showman revolves around P.T Barnum as he creates a wondrous world on the stage. A tailor’s son, Barnum woos the affections of the beautiful Charity, and together they grow up in poverty  but filled with love. As he promises to make her dreams come true, with their young children, he discovers oddities and wondrous things from across the globe that he decides to showcase, such as a Bearded Woman or a 750 pound man. Soon his show becomes the talk of the town, in both a celebrated and scorned way.  Barnum is constantly aiming for higher, though, much to the detriment of those around him. Can he stopped being blinded by the lights of show-business?

Debut director Michael Gacey develops a spectacular fete of imagination. The dazzling world of Barnum is a collaboration of each vivid colour that spins wildly upon the screen. The costuming and sets enhance this stunning tale with dream-like imagery as you a pulled into this circus world. 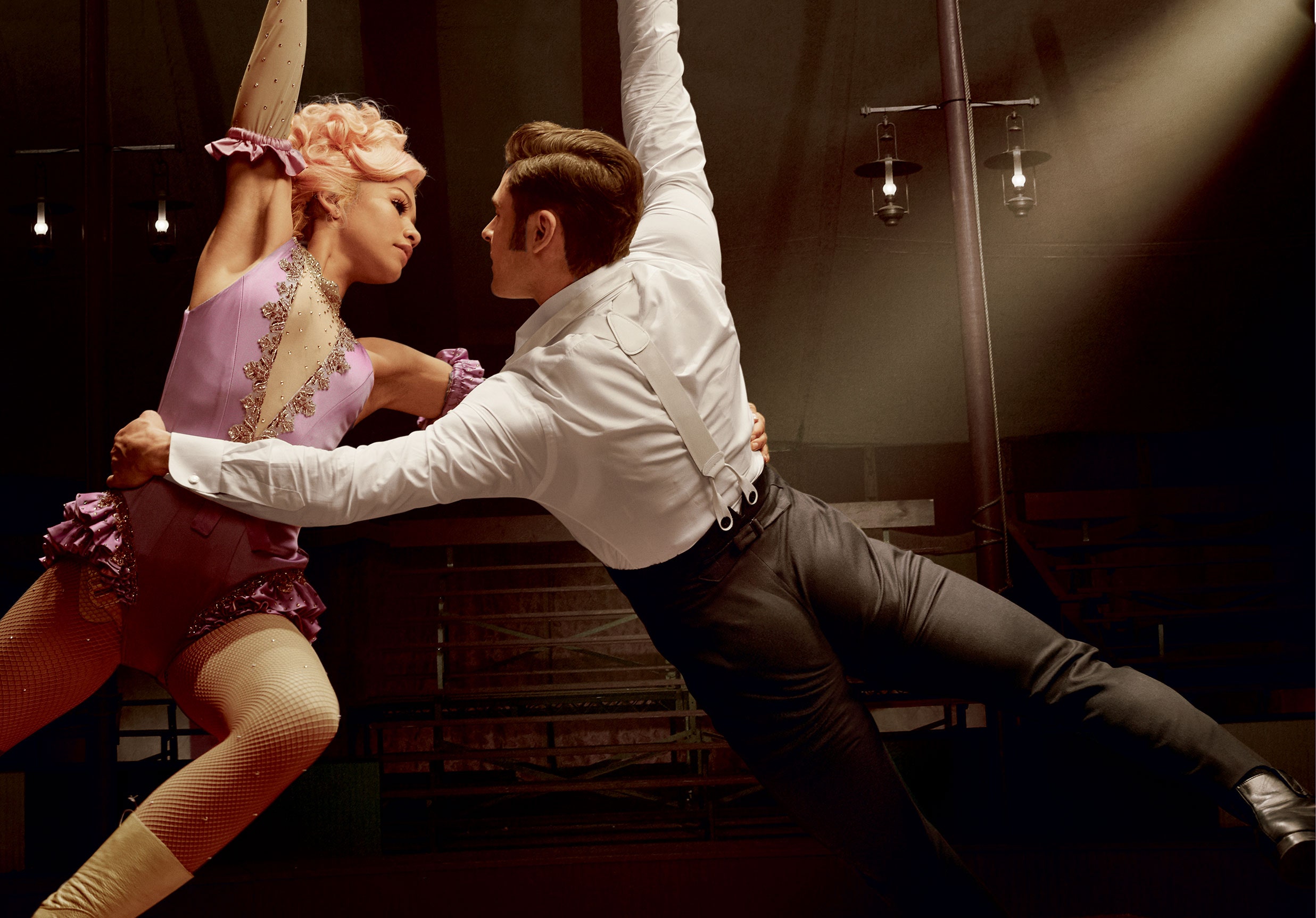 The music is glorious. Each number is a catchy beat-ladden sugar coated song that will drip mercilessly into your soul and drown you in utmost delight. The music by  John Debney mixed with lyrics  La La Land‘s Pasek & Paul are all about triumph against adversity and being true to yourself as well as being inspired and being larger than life. It’s impossible not to let these tracks seep in and when they are matched to Ashley Wallen’s impeccable choreography (keep an eye on Rewrite the Stars in which two lovers debate their relationship on the end of a theatrical rope), they are a fantastic watch.

This is the Hugh Jackman show. It is a musical clearly developed around his skill, giving him an original character and new songs to showcase. He marches into this role with amazing gusto and absolute heart that his musical talent matches  entirely. To think he started this year with the brutal and astonishing Logan and has ended by dazzling us in The Greatest Showman is an epic showcase of his versatility. Alongside him is Michelle Williams, Zac Efron, Zendaya, and Rebecca Ferguson who each add their own musical prowess (bar Ferguson who is dubbed by Lorna Allred in the emotive Never Enough,) and acting expertise.

The Greatest Showman is brilliant….

….but it is also super shallow with a superficial plot that tries to tackle social justice issues but gets itself caught up in the glitz and the glitter. There’s an ache for more character development beyond Barnum and perhaps to see someone like Lettie Lutz (the Bearded Lady, who’s lace-front facial hair would give RuPaul cause for concern) or Charles Stratton (General Tom Thumb) develop beyond the This Is Me story-line. On that note, the “freaks” or sideshow acts are shuffled off into the background bar when they aren’t trotted out to dance around Jackman and Co. While on the one hand, it certainly (maybe unintentionally) highlights exactly how exploitative Barnum was in fooling his audience and abusing the marginalised, it does make it disappointing that these characters are dealt as a plot device to service the pretty and popular.

Whatever depth the screenplay attempts to dive into, it is pulled back with a musical number or hammy and cheesy dialogue. The plot is hasty and predictable so it zooms through its story without a great navigation, wasting a lot of characters to their sub-par tales. There are so many questions left over and the link to the real Barnum grows increasingly tenuous.

Yet, with all the faults it has, you cannot help but be swept up into its glamour. The songs are indelible and infectious. I have not stopped listening to the soundtrack since I watched it: I wake up every day fixated on a new tune. It’s impossible not to tumble into the world of The Greatest Showman with its grandeur and sparkles and Hugh Jackman. In it’s music is where it finds it’s stride alongside the spectrum of colour, brilliant set pieces, and immutable dance sequences.

The Greatest Showman has joy and is joyous and, yes, there are a lot of silliness involved. Sometimes, though, you have to simply sit back, not think, and enjoy the show.

The Greatest Showman is out on DVD & Blu-Ray now!