There are people out there who seek worlds beyond the norm. Think of all the participants for Secret Cinema, who dress up as their characters and untangle adventures in their films. Think of gamers who like to spend hours uncovering digital mysteries. Think of scavenger hunts, and murder mysteries, and obstacle courses and more. We all seek a fantastical dream beyond the realms of what we are confined to.

Dispatches from Elsewhere is a television show that taps into this specific emotion – taking the audience and its characters down an unravelling rabbit hole of entertaining television. 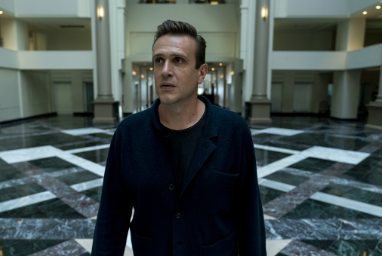 Created and starring Jason Segal, Dispatches from Elsewhere revolves around four strangers – Peter, Simone, Janice, and Fredwynn – who are brought together by an inventive game that takes them across the city of Philadelphia. As they delve further into the mystery, they uncover truths about one another and themselves. But can anything they do be trusted?

Narrated by the enigmatic Octavio Coleman, played by internet’s sweetheart Richard E. Grant, Dispatches from Elsewhere is an utterly compelling television show that is full of twists and turns. Though it is a little slow to start, especially as you follow everyman Peter, trying to uncover the initial game. When he runs into Simone, however, and the real game starts to unfurl, the television show becomes intriguing in an enjoyable way. Whimsical and weird, the show is different and interesting, shifting through fourth-wall breaking scenes and meta story-lines.

The biggest strength Dispatches from Elsewhere has is that the characters are in written with depth. True, they start with these opposing one-note personalities – the shy and bored every guy Peter, the free spirited Simone, the nervous and lonely Janice, and the analytical, paranoid Fredwynn.

The show, however whilst unravelling the truth and game, develops the characters beyond their archetypes. Segal slots comfortably into his usual basic man role who yearns for something more and he has extreme engaging chemistry with Eve Lindley’s Simone who struggles with her identity and self-loathing. Andre Benjamin is great as the computer-like Fredwynn who tries to uncover a conspiracy but also hopes to understand more social interactions whilst Sally Field adds layers to a character who could easily be a dismissed as the old lady.

There are ebbs in the story-line that you struggle with as you try to uncover the mind-bending series. Plus, Benjamin is good as Fredwynn but the cold, calculated character takes some warming too.

Yet there is enough in this series to follow. There are lovely little threads to look out for too such as the constant mention of Law & Order or the natural colourful hidden gems of Philadelphia, including grand buildings or vivid street art. There’s a lot of detail imbued. Plus, there is a memorable and haunting score by Atticus and Leopold Ross which embellishes the magical realism of the episodes.

For fans of shows such as Maniac and Legion, however, this is a television series with bite and you soon will be heavily invested as weekly episodes. Dispatches from Elsewhere is a different, daring, but diverting television show.

Continue the adventure when Dispatches from Elsewhere
airs on Wednesdays at 9pm on AMC.
AMC is available on BT TV (332)