Sixteen years ago, we were bemused with a delightful cult comedy film Wet Hot American Summer. A somewhat parody of teenage summer films, it blended the satirical with the silly and produced a riotous film. A couple of years ago, creator’s Michael Showalter and David Wain continued the film in a small Netflix series called First Day of Camp. Met with critical acclaim for tackling the comedic parody with unparalleled energy.

Now today we have a sequel to both the TV series and the movie, 10 Years Later. And to celebrate, we’re looking at the season that came before it. The aforementioned First Day of Camp.

Taking the show back to before the film, First Day of Camp sees all of our favourite characters like you’ve never seen them before. Leading up to how they got to Camp Firewood and became best of chums, the show sees a mysterious outsider, a man turned can, an impending marriage, a show-stopping musical, and teenagers with hormones shoved into a Camp together. Oh, and also, Ronald Reagan who is desperate to see Camp Firewood implode.

The instant hilarity here is having folk so much older (sorry,) than when the original film came out, play technical younger versions of themselves. Filmed over several days, these now massive names coming back to reunite to portray younger versions of their cinematic selves. With previous actors actors returning such as Amy Poehler, Bradley Cooper, Janeane Garofalo  as well as new additions joining the cast Chris Pine, Lake Bell, and Kristen Wiig. They all come together to produce a tongue-in-cheek production that is bizarre, compelling, and utterly full of heart.  It is so rambunctious and completely unforgettable. Each character has their own outlandish tale that builds upon the film in such a seriously genius way. 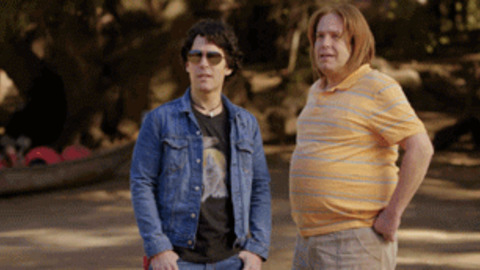 There is an inherent stupidity to the action here and that makes you ache alongside its boisterous ways. The series is crazed. I mean, H. Jon Benjamin’s camp owner Mitch turns into a can of vegetables but still walks and talks around. Michael Cera is a lawyer who gets shot, and there is a massive government conspiracy somewhat stopped by Chris Pine’s dangling black hair and rock star charms. Sending up teen movies in a glorious way, including references to Never Been Kissed and High School Musical.

And in the middle of this,  as always, Christopher Meloni steals the show as ex-Army man Gene Jenkinson. Though here, he starts as coiffed prep Jonas Jorgenson.

With rumours that the show was filmed over the course of a few days due to the schedule of the now famed actors (Bradley Cooper only able to film in the morning of one Sunday, apparently,) Wet Hot American Summer: First Day of Camp is a completely unmissable series with enough jokes that make each and every episode superb on every level of comedy.