There’s a strong argument to be made that the only truly functional family is a dysfunctional family. It is in the clashes of character and convictions mediated by the bond of blood and instinctual inseparability that family life is defined, especially in the ever-maddening and increasingly divisive world we occupy today.

In multi-hyphenate artist extraordinaire Miranda July’s latest self-written and directed feature Kajillionaire, the concept of a dysfunctional family is pushed to its limits and beyond, becoming in the process a rallying cry for the outcasts and misfit children of the world to begin seeing a world that is bigger than the one their parents may have imagined for them.

Old Dolio (Evan Rachel Wood) is 26 years old. Dressed in baggy tracksuits and rocking a baritone voice that initially hits as a comical character quirk and quickly becomes an indicator of the utter ‘otherness’ she feels to whatever a young woman is supposed to be, Old Dolio spends her days running scams, pulling off con-jobs, and writing forgeries for and with her parents, seismophobe Robert (Richard Jenkins) and battle-axe Theresa (Debra Winger). She’s been doing it so long, prancing into post-office hitjobs and partaking in rent money swindles, that her dad quips that she learned to forge before she learned to write. “Well actually, that is how she learned to write” he deadpans, drawing a chuckle and a grimace simultaneously, as much of the parents’ words and actions do throughout July’s film.

When the unorthodox family of cons have a chance encounter with Oceans 11 enthusiast Melanie (Gina Rodriguez), their unlikely new recruit changes everything. Confronted with a vision of liberation, of beauty, and of someone who can relate to her on a level that is deeper than splitting the profit from a hit three ways, Old Dolio finds herself questioning why her parents never called her ‘hon’, why they never made pancakes together, and why Melanie shows any interest in her when she has nothing to steal for her.

Throw in a series of sessions getting paid to attend a parenting class, where she becomes transfixed by the baby’s natural instinct to drag itself from its mother’s abdomen to her breast, a quiet transformation begins to take place within Old Dolio. 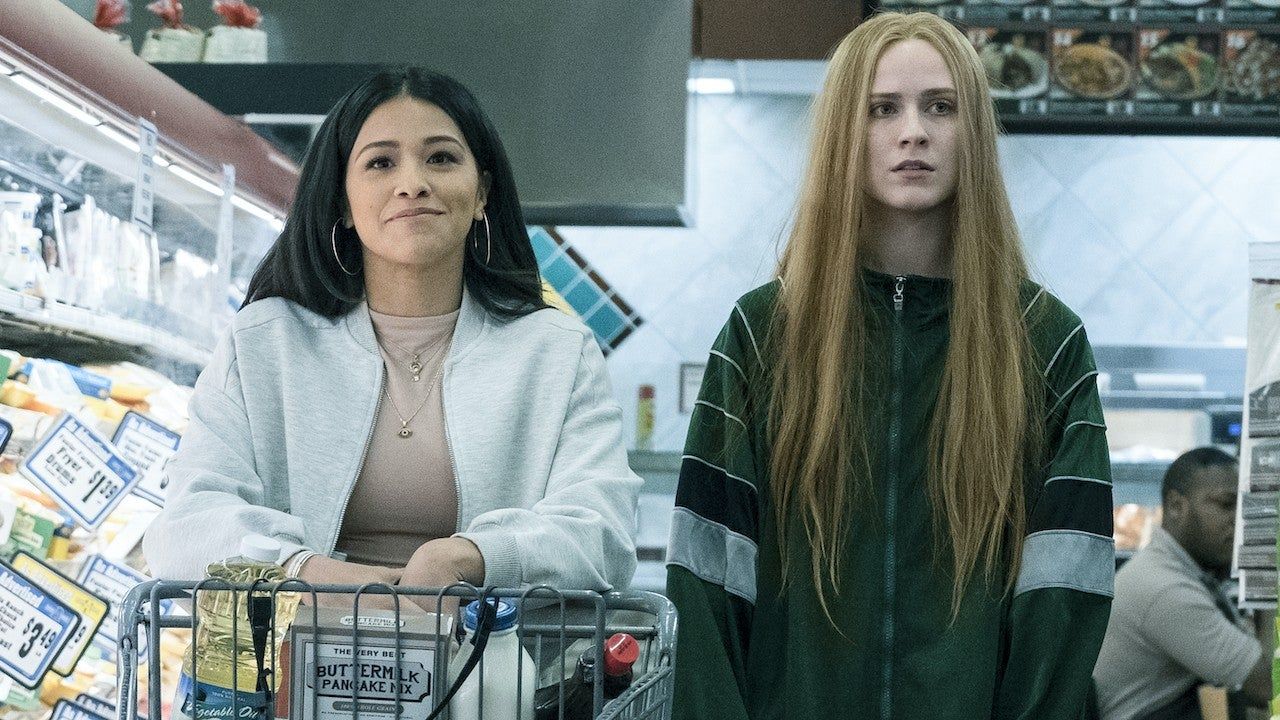 As Melanie’s spunky vitality and perpetual questioning of Robert and Theresa’s parenting methods, or lack thereof, opens Old Dolio’s eyes to the greatest swindle of all, that her parents stole her childhood and made her believe their love was a prize to be paid for in cash, July’s oddball odyssey into these characters’ lives becomes something more than its genre trappings and colour and quirk may suggest.

Kajillionaire blossoms over its runtime into a tribute to all of the kids out there who ever felt their only value to their family was what their parents could take from them, and in the butterfly-like emergence of Wood’s Old Dolio from a chrysalis of neglect and psychological abuse into unique radiance and charming wonderment, a heroine emerges for a generation caught adrift.

Supported beautifully by an energetic, vibrant Rodriguez, and bolstered by Jenkins and Winger’s completely wackadoodle comic turns, Kajillionaire is a unique, eye-opening, emboldening, rapturous romp of a film. Whilst its off-kilter tone and prismatic nature may throw some off initially, if you stick with it you will be handsomely rewarded with a cleverly woven love story and a damn good time.

In a year with little to shout about, Kajillionaire is a ray of light piercing through the darkness, a film that teaches us that the only way to truly be rich is to be free.

Kajillionaire is out in cinemas now.