I had my doubts. It seems important to open with this admission to fully understand my post-watching feelings about the film. The disasters with the poster art, overblown trailers and snippets of the book being shared on social media had caused me to be slightly wary. Even though I knew that it was being directed by one of the greats, the Steven Spielberg, I was still wary.

Although Ready Player One isn’t perfect, it has so many redeeming qualities. What could easily have been a Generation Game revolving conveyor belt of 1980s references is instead, first and foremost, a proper science fiction adventure story. Emersion into things is instantaneous and we stay fully engrossed for 140 minutes.

Both worlds, that of 2045 Columbus, Ohio and the virtual reality world of the OASIS (Ontologically Anthropocentric Sensory Immersive Simulation) are fantastically rendered. Wade Watts (Tye Sheridan) is our guide to proceedings. Orphaned during some of the disasters that have rendered the world’s cities he spends most of his time in the OASIS. It’s there he can be someone else, Parzival – someone who has friends and is capable of achieving great things. His biggest quest is one that most of the OASIS are undertaking, trying to find the three Easter Eggs left behind by its late creator James Halliday (Mark Rylance). Whomever finds the Easter Eggs will be awarded full ownership of the OASIS; something that the CEO (Ben Mendelsohn) of a large corporation will do anything to get this hands on.

Even the biggest sceptic will find their worries appeased very early on. That’s because within minutes you remember just whose hands you are in. Think of Spielberg’s back catalogue, think of his narrative trademarks and themes – this is the perfect movie for him to direct. This may not be the most classic of his movies, but neither is it a greatest hits compilation.

It’s a solid story told in his style and packed with all manner of references. With the wrong director this could have been a patchwork quilt or scrapbook of 80s nostalgia. Instead it’s an addition to his filmography that has throwbacks to his previous works, and the works of others, whilst also packed with humour and some truly dazzling set pieces.

The challenge for the second Easter Egg is one of those set pieces; an extended tribute to a film that involves a level of recreation so perfect it feels like a spoiler to name the film. If you are a cinephile, even to a small extent, you will get a joyous kick out of it. It’s truly mind-blowing how spot-on this sequence is. 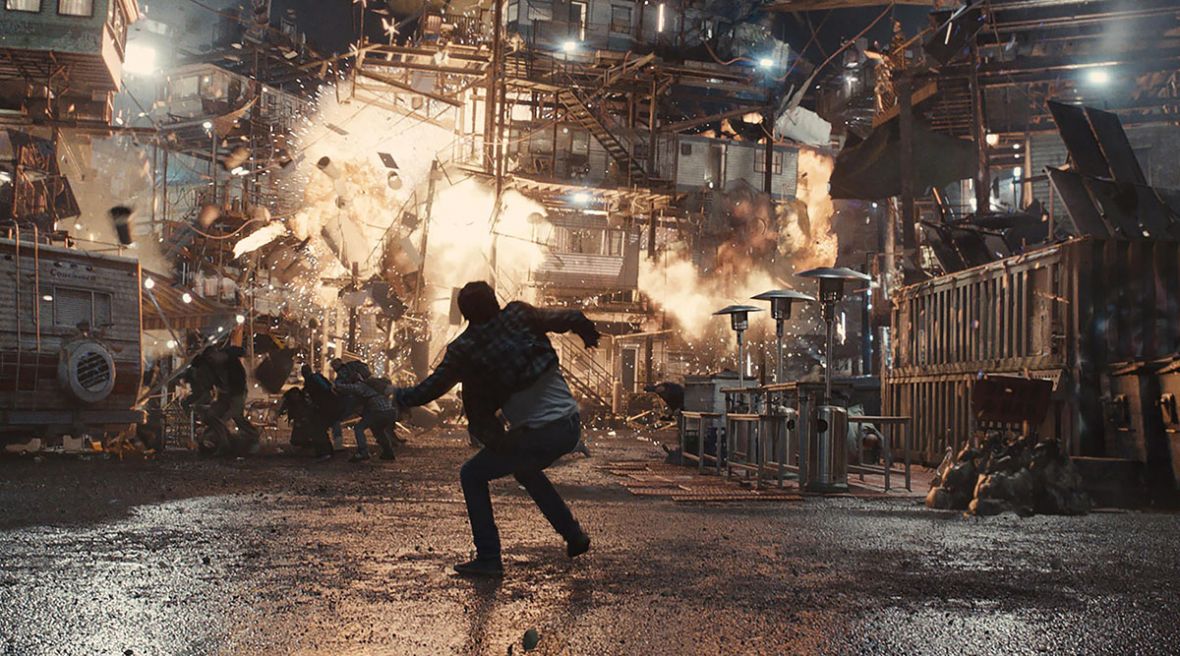 The only major downside of this film is more audience related than the film itself. With the wrong audience this film could be a less than positive experience. There is a certain noise some people are prone to making when they recognise an in-joke or reference within a film. It’s a quasi-ironic, rather self-congratulatory, and slightly smug blend of a laugh/chuckle/snort. When you consider just how many of those references appear within the film, well, you can imagine…

The Eighties references vary in terms of obscurity (my personal favourite ‘As you wish.’) There’s something for everyone and you don’t have to get all of them. This is a menagerie of pop culture that doesn’t require an encyclopaedia as it is first and foremost a well-told story.

So go see it, get your geek on (just don’t laugh/chuckle/snort too often…)

Ready Player One is out 29th March!

One thought on “Ready Player One – Review”