By 2016, we’d been inundated with many, many superhero films.  The increase of spandex loving, power wielding, evil fighting heroes had reached breaking point, much like Deadpool’s great ass in pants. The film industry’s over-reliance on trotting out superheroes to give us an action flick may please a lot of us but it can be wholly infuriating for a regular cinema going who just wants at least one year without Marvel or DC swinging their balls in their faces.

Alas, that is a distant future where robots dictate our viewing schedules (movies about robots.) All is forgiven, however, when  really, really, ridiculously good superhero movies such as Captain America: Civil War come out. 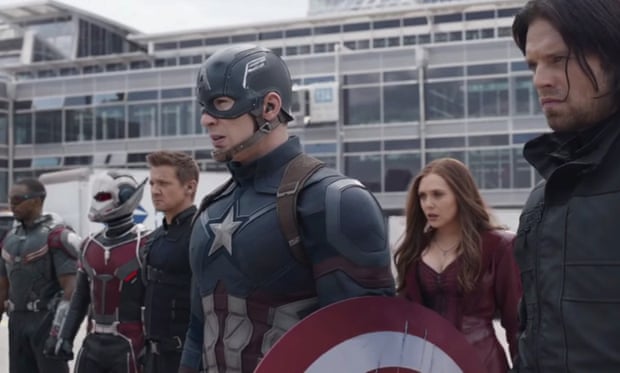 After the disbandment of SHIELD, and the destruction of Sokovia in Age of Ultron, the public damage that the Avengers leave in their wake has caused their usefulness to be brought into question, especially after a mission in Lagos leaves many innocent people dead. When confronted by his conscious, Tony urges all the Avengers to sign up to a government scheme that keeps tabs on superhero affairs. Captain America doesn’t see this as fair, knowing that agendas and those in charge can easily be corrupted. Besides, his friend Bucky has been implemented in a terror attack but when the previous Winter Soldier denies all knowledge, it seems that there is someone else pulling the strings…That isn’t before the heroes start a war….a civil war…

The political landscape and the change in atmosphere for the third Captain America film has changed the trajectory of our most lovable goofy hero into a significant, strong, and allied hero. Whether you are Team Cap or Team Iron Man, the Russo Brother’s allows each side their own pedestal to state their case. Steve Roger’s determination to make this land fair and free, whilst also protecting his metallically armed boyfriend may have Tony’s tin can head rapping against the wall. But equally, Tony’s constant arrogance shows that he is driven by ego, rather than the valid program and when his own priorities shift, he moves with them. This liquid landscape allows the film to keep energised and flowing, deep with themes, semantics, and politics alongside the action.

The likes of Chris Evans, Robert Downey Jr, Elizabeth Olsen, Anthony Mackie, Jeremy Renner, Sebastian Stan, Paul Rudd, and Scarlett Johansson, all return as their superheroes, respectively (click their name to see who, in case you didn’t know,) and bring a fiery passion to characters who should be cinematic exhausted by now in the Marvel Cinematic Universe. That means the writing, direction, and performances are completely in sync to make an arduous two and a half hours seem like a breeze. In fact, you’ll be salivating for more after the credits (and two credit sequences roll,) because everyone still believes in the power of comic book films and brings their circled A game to Civil War.

New faces appear in this third Captain America film such as Martin Freeman and Daniel Bruhl. On opposite sides of the coin, their acting is still impeccable and brings a freshness to the MCU. Yet it is the additions of Chadwick Boseman’s T’Challa/Black Panther and Tom Holland’s Spider-Man who enter this new heroic film. Though Black Panther is a crucial role, and played wonderfully by Boseman, the former is somewhat watered down in lieu of his origin story outing  (which is amazing, by the way.) The latter, however, is the real joy of the whole film. Tom Holland’s casting as the web-slinging was met with grumblings. We’ve been so used to thirty year olds playing teenagers that the baby-faced Holland seemed a bit jarring. But this is by far the best portrayal of the comic web-slinger on the big screen, adding the right amount of quips and snarky geekiness that made us love the red and blue spider in the first place.

Arguably, Civil War is not as good as Winter Soldier, particularly with twists and a punching ending the predecessor delivered. Civil War suffers from mild pacing issues in the overall set-up as well as a rather cheesy seemingly tacked on ending. It’s also irritating that Team Cap’s philosophies get somewhat sluiced down to Bucky love. However, with strong action sequences, brilliant character development, new introductions, and a lot of well-placed humour (Bucky and Sam’s frenemy relationship is pure gold,) the end result makes you completely gleeful – leaving the cinema exhilarated by superheroes again.